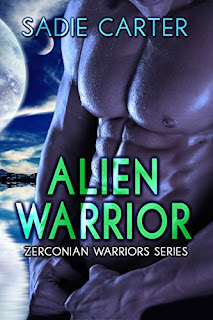 Stuck on a military outpost in the middle of nowhere, Zoey had been praying for something to relieve her boredom.

She never dreamed that relief would come in the form of a seven-foot tall, sexy alien. One who claimed she belonged to him.

Except, there was something pulling her to him… a deep, hot attraction she couldn’t deny.
Dexanon Xa’a always thought his mate would be a sweet, obedient female. Instead, the Gods landed him with a maddening, outspoken, outrageous female who didn’t comprehend the honor that had been bestowed on her.

Dex might have a rockin’ body, but his ideas about women needed a total overhaul.
And she was just the woman to do it.

Zoey lived on the planet Solim on a Military outpost. When she received a communication from a Zerconian warship asking to land because they were in need of repairs to their ship, they let them land. She went out to greet them and that's when The Crown Prince Dex first spotted her and knew instantly that she was his mate. Dex was really mad that her commander had allowed her to come out and greet him and his people alone. His people kept their women safe at all times and never would have let her greet aliens they didn't know much about by herself.

Poor Zoey doesn't know how to react to Dex because he's very much the alpha male and just assumes that she will follow his orders. But she's no pushover and doesn't like the turn of events that's happened between them. But he won't let her go and let's her commander and friends know that before he and his ship takes off with her. Dex and his people are a warrior race and their weapons are far superior to that of Earth's. So the humans really have no choice but to let her go. Once aboard the ship, she and Dex don't have the best of times at first because something was wrong with her and Dex is so mad because of the way she is acting. Dex is used to females being submissive and doing what they're told and Zoey isn't like that at all.

Once they start talking and getting to know each other more, Dex becomes a little more reasonable and so does Zoey. They want their relationship to work so there's going to have to be some compromises on both their parts and I really liked seeing that. This was a fun story and I liked seeing them change a little as they got to know one another.