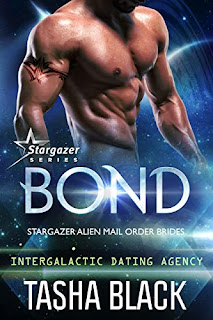 When aliens arrive, they expect a warm welcome...

Posey Quinn has always believed there was more to the world than what she can see. So when she arrives in Stargazer with her head full of conspiracies and high-end hairspray, she isn’t entirely surprised to learn that instead of donating eggs for tuition money, she is being asked to make an alien fall in love with her, and become an ambassador for humankind. What she doesn’t expect is how irresistible Bond is, and how hard it will be not to lose her own heart to the man who plays her body like a violin.

Bond learned about human culture from the collection of ‘80s movies his planet received in an interstellar time capsule. Now he is is on Earth to fill one human female with as much pleasure as she can bear, a mission he’s finding very agreeable. But he’s not just here to fall in love. Tasked with using his powers of human seduction to glean what he can about Earth and its inhabitants, Bond knows that if the planet’s resources are worthy and its residents aren’t, his days of pleasing Posey will soon be at an end.

If you like strong women, sexy aliens, wild adventures, steamy sensual scenes, and happily-ever-afters, then you’ll love the world of Stargazer:

Posey decided to donate her eggs and meets two girls who are now her best friends. Now a year later, they all get a call that it's time for the egg donation process. But when they get there they're told that they're going to become alien mates if they agree to this. Posey isn't sure if this is something that she wants to do, I mean they're aliens.

Bond is one of the aliens that Posey and her friends meet and he has his eyes on Posey as a mate but she hasn't agreed to this since she thought she would just be donating eggs.

The aliens had contacted Earth years before and had to grow human like bodies before they came here because their natural state is a gas one. Some of the town's people don't like the Dr. or the people that are at the building Posey, her friends and the aliens are staying in and they let the guys know it. Right from the beginning there seems to be some danger from some of the guys in the town. There are a couple of run-ins and confrontations so when one of the aliens challenges some of the town's people to the Fall Festivities Games, the bet is set to staying in town or leaving town and never coming back.

As the aliens and humans get to know one another it made me laugh at times because the aliens really were trying.