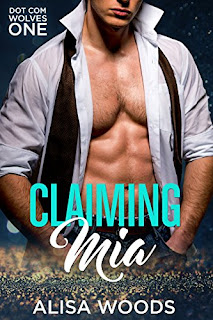 LUCAS
I’m a mess. Broken. Lost my mate and almost myself. In no shape to help anyone.
Then the sexy girl serving me drinks stumbles into trouble with a bunch of wolves who are bad business—I should know. They’re the competition. And they’re as dirty at dot-com investing as they are predatory on young things like her. So I save her. Because I may be broken, but I’m not an ass.

Only she shows up the next day at my office. As my intern.

And now the Red pack is after her, putting us square in a pack war—one she doesn’t even understand. I’m in no shape to claim a mate—not happening—but if I don’t, the Red’s jackass of an alpha will.

MIA
I’m just trying to earn my degree and dig my way out of poverty.
I was born a shifter—more of my bad luck—but I’ve kept that a secret, so it doesn’t ruin my life. Shifters are monsters. Criminals. And I’m trying to make something of myself. This internship at the hottest internet business development firm in Seattle is my ticket out… only the boss is a wolf. And insanely hot. And he saved my life.

I’d break all the rules for this guy—except he wants nothing to do with me.

The wolves who do are the Big Bad Wolf kind. The kind I’ve always heard about.

I’ve got nowhere to turn… but to the one guy who doesn’t want me at all.

Lucas was a mess ever since his mate died, he'd even left his father's pack but still helped out with the business. But when he saw Mia in trouble he had to help her. But doing so made the wolves from the red pack think that they could hurt him by hurting Mia.

Mia lived in a dorm with her roommate and worked at a bar. All that changed when three wolves from the red pack had come at her and tried attacking her. The only reason she got out unscathed was because Lucas had stepped in.

Lucas couldn't stop thinking about Mia after he saved her and was very surprised when she showed up at his business as the new intern. But now that she was here he knew that he had to keep her safe. She didn't take the danger seriously until the wolves came after her a second time. Lucas took her to his home to keep her safe and when they couldn't keep their hands off of each other it looked like things would change for the better for both of them until Lucas learned her secret...she was also a shifter and kept it a secret from everyone because she didn't have a pack.

Once he knows what she is, he let's her know that they have to keep their hands off each other because he doesn't want another mate since he blames himself for his mates death. But when an alpha from a rival pack kidnaps Mia, all bets are off because now Lucas wants her and nothing is going to stop him.

Holy shifters, Batman! This was one hot read with some really great characters. So much more happens and it had me on the edge of my seat to see what would happen next.