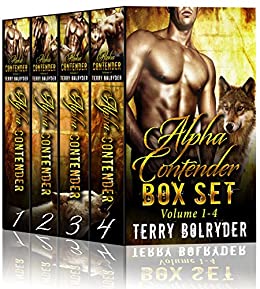 Misty has few expectations from life. Work, read, sleep. But when she hears from a complete stranger that she's actually a powerful, shape-shifting werewolf, her life changes forever.

Lindon believes he already had his shot at love long ago. And lost it. The tall, blond, sexy shifter is now only trying to keep his promise to his father by protecting Misty as she learns about her new place in the world and seeks to find a future mate.

The only problem: she'll be meeting all of her prospective suitors at one time, and in one place. All TEN of them. All hot, single, alpha males competing for her heart.

Misty finds out she's a female werewolf and an alpha. But then she's told that she's in high demand and she needs to choose to mate between 10 alpha males that are coming to try and win her over. The only problem is that while she doesn't mind the attention of the other males, she really only wants the attention of Lindon.

Lindon was a jerk to Misty when he first met her because he didn't know exactly who she was. She's held it against him for a while because he was a jerk and he doesn't seem to want the attention he knows she's wanting to give to him because she's attracted to him more than any of the others.

After all the alpha's show up at the mansion and start to get to know her, Lindon finds it harder and harder only to be her protector. He finds himself getting jealous when she kisses one of the other men or when they touch her. He starts to realize that he feels something for her and keeps fighting his feelings for her even though she really likes him more than the others.

During all this getting to know everyone there's something dangerous taking place behind the scenes and we don't get to know about it until near the end. I won't give too much away but Misty should have been told. When that part of the story unfolds, I was shocked because I thought I knew what was going on and I was wrong. It was a good twist and it also brought Misty and Lindon closer which was nice. I was getting tired of him constantly giving her mixed signals but he had some stuff to work through.

This had previously been several shorter books in a series but I read them all at once in a boxed set and really think they should have been one larger book to begin with. If you're going to read this series make sure to get the boxed set.