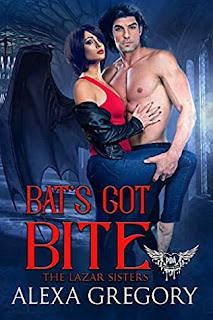 Book Description
Can a vampire runaway groom and the bat shifter bounty hunter hired to bring him back find common ground? Or will centuries of misunderstanding stand in the way of their happily-ever-after?
When paranormal bounty hunter Ecaterina’s life is threatened by an old mark, she’s ordered to return home and lie low. She intends to follow orders until she’s ordered to track down the vampire prince who fled his wedding.
Valerian knows his arranged marriage won’t work. He needs to find his true mate if he wants to avoid the same fate of his ancestors.
When Ecaterina catches up with Valerian, they discover they have more in common than they once thought. They both love adventure and hate archaic traditions, and they’re extremely compatible in bed. Too bad a royal vampire prince and a bat shifter are forbidden to be together.
Can the two of them work together and thwart the renowned killer who’s after Ecaterina? And even more challenging, can they make their clans accept them for who they are?
This steamy romance novella is part of Milly Taiden’s Paranormal Dating Agency (PDA) world.
My Review
Ecaterina is a bat shifter and works as a bounty hunter. When one of the guys who she brought in escapes jail and wants her dead, her boss makes her take a leave of absence. She goes home but her family is driving her crazy because they want her to follow the family traditions and she's not.
Valerian fled a wedding that he knows would never work and even though he wants to find his true mate, he doesn't think there's any chance of that ever happening until he meets Ecaterina. She's been sent to find him and bring him back to his wedding but he has other plans.
Ecaterina's family are servants to the royal family and so Ecaterina was in the castle for the Prince's wedding and when he fled, she was asked to go find him and bring him back by his family.
The fact that the matchmaker, Gerri Wilder is in this book made it that much better for me because I love her. She really knows how to match a couple together and have things work out. Ecaterina's family had sent her to this matchmaker some time ago and she knew she wasn't ready to be matched with anyone so even though her family wanted her married off, Gerri didn't find a match for her...yet.
Now that Valerian had escaped marrying someone he didn't love, he was on his way to Gerri Wilder in the hopes of finding someone he could love. She tells him that he'll find his soul mate at some point and he goes about his business not knowing that Ecaterina is about to enter his life and make things more complicated.
When these two do meet, it's pretty funny. I didn't expect her to be able to get the drop on him as easy as she did. She's one of the best bounty hunters out there and it shows but even she was a little surprised it was so easy. I liked that these two seem to like each other right away. Valerian is lusting after her almost right away which I found funny. These two make a pact that she'll hold off his family for a week before bringing him back so he can figure out how to let his fiance know that he's not going to marry her. But right as they are getting along and getting to know each other better she gets a message from the guy who wants her dead. Things take a complete opposite direction at that point because Valerian feels protective of her and now wants to help her catch the escapee.
While he is hiding from his parents and helping Ecaterina find the bad guy, they find themselves in danger for a while but it only brings them closer so they can no longer deny their feelings for each other. The ending was great and so was this story. I think these two will be great together.
I give this book 5 out of 5 stars.
Posted by Mary Kirkland at 12:00 AM