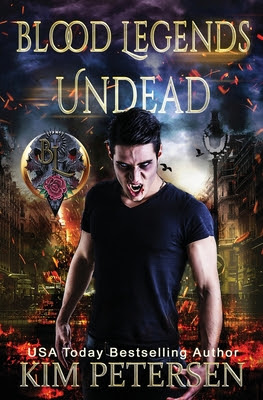 Book Description
What if saving humanity meant facing your deepest fears?
A deadly virus has claimed the lives of millions and ravaged the earth. Human survivors spend their days and nights fighting to stay alive in a world now owned by vampires.
Jett's plans to get further off-grid fall apart when his woman suddenly disappears at the hands of the hawkers - the most deplorable and dangerous humans to survive the apocalypse.
Now, Jett is forced to confront evil head-on as he faces choices that he never dreamed possible.
Can he survive long enough to retrieve his woman before she is slaughtered? Or will he succumb to the bloody wrath of the Undead?
Undead is a new urban fantasy set in a post-apocalyptic world from bestselling author Kim Petersen, the first book in the Blood Legends series.
My Review
Now that vampires rule the world, humans have to fight to stay alive. Jett is fighting to get to his girlfriend and daughter. Humans are dying because of a virus and now not only are vampires after us but so are evil humans who are taking advantage of the situation.
Jett loses his girlfriend to hawkers who are humans that are taking advantage of the situation. They kidnapped his girlfriend and want a certain kind of blood in exchange for him to get her back. So Jett and his daughter go looking for it and get caught by some vampires. Jett has to leave his daughter and get the blood away from a certain vampire because he can use it and become more powerful.
An unexpected ally comes to his rescue but now he has to find a way to get not only his girlfriend but his daughter back too. That's where I thought this story was going but real quick it headed in a totally different direction and my heart was left in my throat as I kept reading. I felt bad for them and at the same time I was kinda rooting for them and especially Jett when I realized what he was doing and why.
I got this book because of the cover. I mean look at that cover! I'm so used to reading about romantic vampires that it was a little jarring when I realized this was not one of those kinds of vampire books. These vampires are ruthless, blood thirsty, demons. I did enjoy the story though because Jett loved his girlfriend and daughter and ended up having to make several tough calls.
I give this book 4 out of 5 stars.
Posted by Mary Kirkland at 12:00 AM