Review: Fated For The Bear by Mina Carter 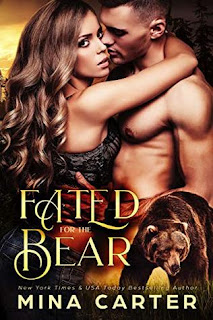 Book Description
Girl meets boy = classic love story. Girl meets bear... Wait, what?
Kacie has always known there was something odd about the small town of Beauty, but she doesn't expect that oddity to almost claim her life or land her in the arms of her long-term crush; hot veteran Dean. Okay, he's nuts but she can't argue with that, not with a body like his or when he's whispering things like 'fated' and 'destiny'. Even if he does claim to be a werebear...
She's his mate, but she's human. He's so screwed...
Leader of the Beauty bear clan, Dean is between a rock and a hard place. His fated mate is human but he daren't claim her. The elitist asshats in the clan would have kittens. But when an attack brings her over into the bear world, he's out of time and out of options. Even worse, the town has an rogue bear problem and internal clan politics that put Kacie in the crossfire.
Forced to fight battles on all fronts, Dean must bear up or risk losing her forever...
PLEASE NOTE: This title was previously released as 'BEAR UP' in the More than Mated Kindleworld.
My Review
Dean knows that he can't have Kacie because she would never love him if she knew he was a bear shifter. So he keeps his distance even though it kills him to see her with anyone else.
Kacie has had the hots for Dean since they went to school together. She doesn't think he even knows she exists but when she and her friends get hurt, he's right there to make sure she's alright.
Kacie is out one night with her best friend who happens to be a female bear shifter when they are attacked. Kacie gets badly hurt and Dean is called to help her get better. The funny thing is when she wakes up she thinks she's dreaming because Dean is there and is being nice to her.
I loved the action and adventure that was packed into this short novella. I really liked Dean and Kacie because she ended up being more than ok with who and what he was. I liked most of the shifter people but one of their laws is kinda crazy. I can understand the need for secrecy but it was a little over the top.
For a quick novella, this had a lot of story.
I give this book 4 out of 5 stars.
Posted by Mary Kirkland at 12:00 AM