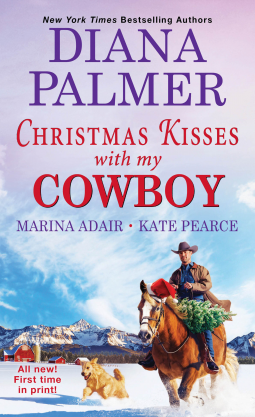 Book Description
This Christmas, the best kind of trouble comes in threes: Three bestselling authors. Three stories of holiday romance. And three cowboys who are ready for love—whether they know it yet or not . . .
MISTLETOE COWBOY * Diana Palmer
Horse whisperer Parker doesn't drink, smoke, or gamble, and he doesn't have much to do with women, either. Until he meets winsome widow Katy, and her sweet child. Could Christmas kisses under the mistletoe bring the handsome wrangler the gift of his very own family?
BLAME IT ON THE MISTLETOE * Marina Adair
To claim his slice of the family ranch, Texas Ranger Noah is forced back to Tucker’s Crossing. All he expects to find is a tractor load of painful memories—until a holiday storm, a power outage—and perhaps the magic of Christmas—deliver him to rescue an intriguing woman named Faith. But just who’s rescuing whom?
MISTLETOE DETOUR * Kate Pearce
When Morgan Valley rancher Ted Baker gets out his tow truck to pick up a snowbound driver, he doesn’t expect to find his old school friend Veronica on the lam with her pet pig—much less true love—just in time for Christmas . . .
My Review
I read this because I love Diana Palmer but I like finding new authors to read as well so the other two stories in this book sounded good, but all of the stories in this book were great. But I especially like Mistletoe Cowboy by Diana Palmer. Parker was hard to get to know at first but Katy and her daughter seem to bring him exactly what he needs. Parker is more than he seems because he's not just a horse wrangler, he's smart and has the schooling and military time behind him to prove it but people still think of him a certain way because of his mixed heritage. Of course there's a small misunderstanding that they have to work through before the end but I loved this story and I knew that Diana Palmer would bring me this kind of story and I was right.
Blame it on the Mistletoe by Marina Adair is the first story I've read by this author and it was great. Noah comes back to town and runs into Faith but she's busy trying to make sure her brother has a good holiday and isn't made to feel bad by the townspeople. Watching these two trying to get to know one another was fun. But when someone is accused of theft, there's a rift in the budding relationship until things are all sorted out.
Mistletoe Detour by Kate Pearce was so much fun. Ted goes to help a stranded passenger and finds his old friend Veronica needing his tow truck help. She's running from something but it's her pet pig (Bacon) that really stole the show for me. Veronica stays with Ted while waiting for her uncle to get back from vacation and they decide to celebrate Christmas together which brings them closer as they get to know one another.
I give this book 4 out of 5 stars.
Disclosure: I was given an ARC of this book via NetGalley but all thoughts and opinions are my own.
Posted by Mary Kirkland at 12:00 AM