Review: Given To The Beserkers by Lee Savino 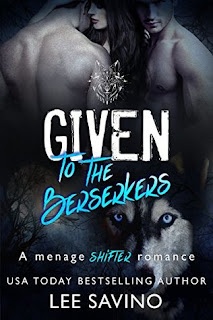 Book Description
Captured to be a prize in the brutal Berserker Games...
My life changed forever when the Berserkers took me. These fearsome warriors must find women to keep their lethal rage at bay...and I am an ideal mate.
The Alphas decree that all warriors must compete in a series of Highland Games for my hand. Of all the giant warriors, two have caught my eye, but I have no choice. When the final match is over, I will belong to the ruthless victors. They will possess me fully. I can only hope they will be the two I could come to love...
Given to the Berserkers is a standalone, full-length MFM ménage romance starring two huge, dominant warriors who make it all about the woman. Read the whole best-selling Berserker saga to see what readers are raving about...
My Review
Muriel and her sisters were captured by the Lowland Berserkers and were to be handed off to a warrior to be their mate. She has come to accept her fate but wishes she could pick her mate.
Fergus is from the Highland Berserkers and while she is caged he slips in close to the cage to talk with her.
When Muriel is informed by her sisters mates that she is to be the prize at the berserker games, she's furious because she gets no say in who wins her and she has to mate. I hated how this started out but I had faith when her sisters mates told her that whoever won her would treat her well or face consequences because she and her sisters are highly prized.
There was a bit of a twist after she met who won and she would be mated to but I really liked the twist. It made it easier to enjoy the story from that point for a while. But then her mates start telling her that she needs to obey them, submit to them, and then there was so much sex. I'm not a prude and have no problem with a lot of sexy times in a book but this just seemed overdone especially since I really didn't get a serious sense of of the three of them clicking in that way.
It was more like she wanted to do her duty and obey them even if she didn't want to at first. She did come to start caring for them after getting to know them a little better and I like that they were both there to care for her, and did really seem to care about her happiness but I needed something more. I also didn't like the fact that the males thought it was ok to punish Muriel when she didn't do what they told her to. I did end up liking this book in the end even though there were a couple of things that bothered me.
I hadn't read the previous books but this told enough of the back story that I never felt lost and had a good grip about why the sisters were so prized as mates.
I give this book 3 out of 5 stars.
Posted by Mary Kirkland at 12:00 AM