Review: A Nurse For the Wolfman by Eve Langlais 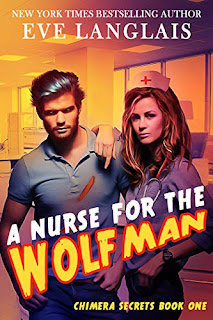 What happens when a nurse falls for the wolfman?

The job offer is a dream come true. Three times her usual salary. Free meals and a suite. The only catch? Margaret can't tell anyone about it.

Hidden in the Rockies, the clinic is well protected and...odd. It doesn't take her long to realize the doctors and scientists are up to no good. Especially once she meets Luke.

Her patient is an angry man who used to be a soldier. Now, he's something else. A savage beast with gentle eyes that glow green when he's agitated.

What has he become?

And will she be next?

Margaret takes a nursing job in a secretive facility in the mountains that pays her more money than she'll ever make in any other job. The doctors, guards and the guy running the place are all secretive and the guards all have guns with sedative darts in case the patients get out of hand.

Luke got hurt while in the military and after being discharged he knew he was too broken to be able to do anything like his old life ever again. So when a doctor comes to him and tells him he can fix everything wrong with him, he jumps at the chance at this experimental treatment.

After being experimented on by the doctors in the secret hospital for years, Luke has had enough and is so volatile that he's kept shacked to a bed under armed guards at all times. In comes nurse Margaret who gets him to eat, talk and be civil after a while. Only she doesn't know that he's only being nice because the person that runs the place has told Luke if he doesn't comply that she'll be hurt so what else can he do.

After a while they really do start to care for one another and when they start to have dreams together at night, they can talk without the doctors knowing everything that they're saying. There's something weird going on at this place but at first Margaret doesn't see it and just thinks that Luke is being paranoid and not being cooperative.  Little by little she starts to see the truth of what's going on there and begins to think that Luke is right that they'll never let him leave so they'll have to escape.

This book had me on the edge of my seat wondering how far the staff was going to take things and wondering what would happen next. But then I got to the end of this book and was shocked at the ending. Utterly shocked at that twist. Never saw it coming even though I probably should have. It actually made me a little mad for a minute but then since this is the first book in this series I'm hoping that we get to see these two in subsequent books and find out what happens with them. I'm really looking forward to seeing what happens and finding out what else is going on at this secret facility. The experiments alone were enough to make me cringe and subjects once we find out what's been done to them, creeped me out at times. This was a great book to begin a new series.