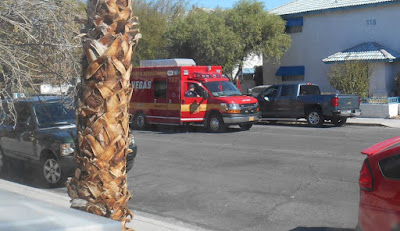 I saw one ambulance that showed up for someone across the street on Wednesday afternoon. Someone was taken in the back of the ambulance but it wasn't someone that I know.
Last week my daughter was out walking Falcor and the police pulled up right beside her and asked her what her name was and if she had ID on her. She didn't but she told them she lived right here since she was standing right in front of our apartment building and she said she could go get her ID if they wanted. They said they were looking for a woman who had just flung herself out of her two story window from her apartment just down the street. The police asked her a few more questions and asked her if she were depressed or suicidal. My daughter assured them that she wasn't the woman who tried to kill herself by jumping out of her second story window. They told her to call them if she spotted an injured woman walking around and they left to keep looking for the woman.
So that's it for this week's Apartment Hell  Life! Be sure to come back next week for more.
I want to thank everyone who sent me messages and emails over the past few weeks that I've been gone. I really appreciate it. I'm not 100% ok yet but I'm getting there.
Posted by Mary Kirkland at 12:00 AM