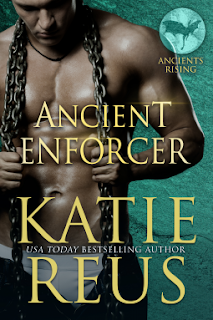 Book Description
An ancient dragon warrior determined to protect what’s his…
Former general Mikael lost his clan, his family, everything, thousands of years ago. Now he’s awakened in a new world that’s trying to rebuild. He and his brothers are ordered to live with Avery, a human female, and her younger brothers. Avery is nothing he should want. She’s too soft, too sweet…too happy. But he can’t stop his growing obsession with her.
The human female who threatens his jaded heart…
House flipper Avery is no stranger to heartbreak, and knows that the ones you love most can stab you in the back the quickest. When she’s asked to shelter a bunch of dragon shifters, her instinct is to say no. Until she meets the ragtag group of males who are struggling to adjust to the new world. Against her better judgment, she agrees to take them in. Even if the gruff Mikael has heartbreak written all over him, she can’t help but fall for the sexy dragon a little more every day. But when a threat from his past emerges, promising to tear their world apart, things suddenly change between them. As they race against the clock to save her family, Mikael must risk everything and claim her before it’s too late.
Author note: Though part of a series, this book may be read as a stand-alone, complete with HEA.
My Review
Mikael, a dragon shifter had just awakened from a millennia long sleep when he and his brothers find a place to stay with Avery. She and her brothers are trying to help Mikael and his brothers get used to the new world they find themselves in.
King is the alpha for the territory that Mikael and his brothers decided to stay in and had made the arrangements as to where he and his brothers would be staying and working. Most humans know supernaturals existed and there in New Orleans there are humans like Avery who wanted to help. As Mikael and Avery spend more time together they both let their feelings show a little more. Avery is a little relationship phobic since her father was a total jerk to her mother and she doesn't want the same thing to happen to her in a relationship. But Mikael has some baggage from his past as well since his family had been killed a long time ago. He wasn't sure he wanted to let another female get that close to him again because he didn't want to be hurt again. Needless to say, they both had baggage that they needed to work through.
It isn't until Avery finds herself in danger that Mikael really shows her how much he feels for her. Sure they had a couple of moments but I'm not sure it would have gone anywhere fast if they hadn't been thrown together because of the danger she was in. Then as if the danger she's in isn't enough, a person from Mikael's past shows up and seems to bring even more danger with him. The twist this story took at that point was a good one though because it really seemed to ratchet up the tension and action in this story.
I loved how Mikael and Avery's romance took a little time to manifest. It was fun to watch them slowly give into their feelings and get to know each other even as the danger got worse for them but brought them closer. I really loved seeing another Dragonling (baby dragon) because they are just too cute. I have a feeling that we'll be seeing more and more of them in future stories. All the different supernaturals in this series have been fun to get to know. You never know what new kind of supernatural will pop up next. I loved this story.
I give this book 5 out of 5 stars.
Disclosure: I was given an e-ARC of this book via NetGalley but all thoughts and opinions are my own.
Posted by Mary Kirkland at 12:00 AM