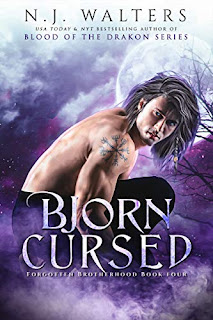 Book Description
Lucifer is up to his old tricks, causing problems for the Forgotten Brotherhood. This time, he’s had a woman removed from the Norse afterlife and placed her right in the path of Bjorn Knutson. After the slaughter of his wife and family centuries ago, tortured and broken, Bjorn was cursed as the first Norse werewolf. Now he’s been tasked by Odin himself with killing the woman who escaped. Failure is not an option.
Before he can track her, he stumbles across a woman being accosted by three men in the middle of the night. Even though she’s human, he intervenes and is shocked to recognize the face of the one woman he could never kill — his wife Anja.
She’s also the one he’s hunting…and if he doesn’t kill her then both their lives are at stake.
My Review
When Bjorn's wife and children were killed, he went crazy with grief. That's when Odin came to him and made a pact with him. Bjorn would get his revenge and Odin would give him the gift to get his revenge. But Bjorn didn't realize that the gods rarely give you anything without a price to pay for it. Bjorn's price to pay was becoming the first werewolf. With his new superior strength and viscous animal rage, he got his revenge but also killed a lot of innocent people along the way. It wasn't until be met the Brotherhood that he was able to get his wolf under control with their help.
After Anja was killed, the goddess Freya told her that she would let her children be reincarnated, born to new parents to live their lives because she and her oldest son had fought so hard to stay alive and save each other and the smaller kids. But Anja would forever stay in Freya's hall being a servant to pay for this and Anja agreed.
This story starts out with Anja finding herself away from Freya's Hall and thrust into our world with no knowledge of how she got there. Bjorn has just had a visit from Odin and given an assignment to capture and kill a female that escaped Freya's Hall, not knowing that the woman is Anja. When Bjorn hears a woman being accosted in an alley by several men, he goes to help the woman and finds his long dead wife...the woman he's supposed to kill. Of course he's not going to kill her though.
Bjorn enlists the help of the Brotherhood and it was great to see all of them again. They don't know how they're going to fight the god's so Bjorn and Anja travel to his cabin until they can come up with a plan. But Freya is informed that someone escaped and she sends her warrior to bring Anja back.
Watching the events from this point unfold had my heart pounding because the twists this story took made me sad for a while. But so many of the characters from past books show up to throw new twists in this story that I never knew where it was going to end up which was a lot of fun. Why does Ms. Walters always make me cry with the books in this series? I know it's a good book when an author can elicit strong emotions from me while I'm reading. I was holding my breath to see what would happen but I was not disappointed at all. I read this book in 2 hours because I couldn't put it down. I read fast but whew, this one had me scouring the pages faster than usual to see what would happen next. I have loved this series from the beginning but this was by far my favorite book so far. I cannot say enough good things about this series.
I give this book 5 out of 5 stars.
Disclosure: I was given an e-ARC of this book via NetGalley but all thoughts and opinions are my own.
Posted by Mary Kirkland at 12:00 AM