This is a new weekly blog post that I'm calling Apartment Hell  Life. I've mentioned a few times some of the crazy things that go on in and around my apartment complex in the past 22 years that we've lived here and people keep telling me I should write a book. But instead of a book, I've decided to share the crazy things that have happened in and around my apartment complex in the last 23 years here in a weekly blog post.
----
On Tuesday I was sitting at my desk in front of the living room window and watched a woman stomp her way across the two chairs and table we have sitting on front of that window. Two days before that though she was out asking my daughter and her friends if they had extra blankets, shoes, socks ect. My daughter's friend gave her a blanket because I'm pretty sure she's homeless and thought that would be the end of it but the next day this woman walked right into his apartment without knocking and asked for more stuff and even asked if she could stay there. Obviously the answer was no. But the next day she was back asking again for blankets, socks, sweats, and shoes. But the day she stomped on my chairs and table I saw her throw away a pair of shoes someone had given her. She's asked my daughter more than once if she could stay in our apartment to which my daughter's reply is always no. I think she might have been mad at her saying no to her more than once and that's why she stomped over the table and chairs. I think she might be mentally ill to act the way she is.
---- 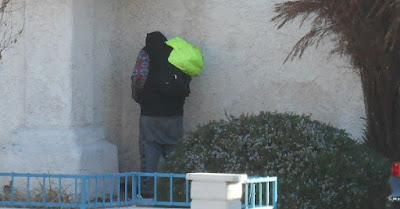 On Wednesday I'm sitting at my dresser at 7am doing my makeup and see this guy walk over to the corner of the building across the street and urinate. The next morning at 4am he and his girlfriend woke me up when they were outside having a very loud argument. This is the same guy in the video below.
On Thursday I was sitting at my dresser in my room putting on my makeup and these two people started arguing. The door they keep going in and out of is the laundry room for that apartment complex and they have been staying in there at night. They are homeless and I've seen them smoking "meth or something" out of a pipe several times. They've been around here for years and they always argue like this. She is usually the one hitting him and then screams that he hit her first. You don't have to watch the whole thing, all they do is scream at each other but it gives you a good idea of what goes on pretty much every week with these two around here. The sun was right in my face which is why the video isn't too clean but if you turn the sound up you can hear them pretty well.
----
On Wednesday morning my daughter walked outside and several of the people around here told her that the Liquor Store that is in the Strip Mall right next door to where I live as seen in this post, was raided the night before and the owner was taken out in handcuffs and arrested for selling marijuana, cocaine, and meth out of his store. Everyone around here knows it's been going on there for years and everyone around here thought that he was paying the police off to leave him alone because he wasn't careful about who knew that he was selling drugs out of his store at all. Guess he wasn't paying them off after all.
So that's it for this week's Apartment Hell  Life! Be sure to come back next week for more.
Posted by Mary Kirkland at 12:00 AM