This is a new weekly blog post that I'm calling Apartment Hell  Life. I've mentioned a few times some of the crazy things that go on in and around my apartment complex in the past 22 years that we've lived here and people keep telling me I should write a book. But instead of a book, I've decided to share the crazy things that have happened in and around my apartment complex in the last 23 years here in a weekly blog post.
On Wednesday the police showed up in force. 2 men down the street were shot in the head and the gunman fled on foot back to his apartment right across the street from me. One was just a superficial wound the other guy was taken to the hospital in critical condition. They were here for hours looking for the gunman.The police were knocking on doors and telling people they had to leave because of an armed suspect. So this lady got her 5 kids out and left in that car right there.

I took a little video when the police arrived across the street from me on Wednesday. The lady who came and got her kids out of one of the apartments is in the car right there and she left. You can also see a man holding his kid come out of another apartment. They made all the residents in that building vacate their apartments for hours, I'm assuming because they thought an armed suspect was in one of the apartments. 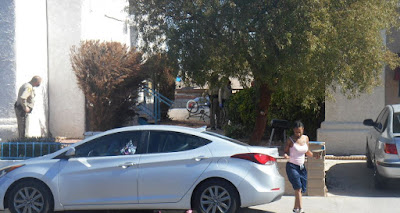 The lady got her kids in the car and left.

There was one officer outside this apartment building for a while and other officers were walking around the back where the alley is. 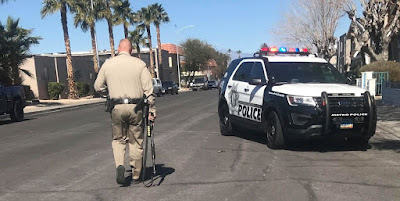 Here he is walking to his police car with his rifle. 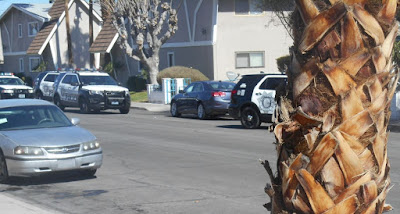 There were a bunch of police cars here.

At one point a bunch of the police were standing outside and other officers were in the back in the alley on the loud speaker asking the people in one of the apartments to come out with their hands up. I took a little video and uploaded to my FB of the police on the loudspeaker if you wanted to listen to it. There were around 6 cops standing around for hours, first searching for the gunman, questioning a guy and then trying to get into all the apartments. At first we were told that they caught the gunman but they later let him go and I talked to him when I had Falcor outside. He was mad because the police thought he was involved and questioned him but they let him go and kept looking around here for the guy.
One of the police officers told my daughter that the guy who had been shot in the head was still alive when they ambulance picked him up but they weren't sure he was going to make it.
I think they caught the person they were looking for because I started seeing people going back to their apartments and they were letting people walk around outside again.
So that's it for this week's Apartment Hell  Life! Be sure to come back next week for more.
Posted by Mary Kirkland at 12:00 AM