On Tuesday at 11pm I was woken up when the flashing lights from the ambulance lit up my bedroom. One of my neighbors was on the stretcher and was taken away by ambulance but he was back 2 days later.
----
Sunday night after I had gone to bed, my daughter had the front door open to get some cool air in here and that crazy woman who stomped all over my outside chairs and table was standing in front of my security door asking my daughter if she was just going to leave the door open and if she could come in. When my daughter told her no she couldn't come in, the woman started messing with my daughter's BBQ that's by the door. My daughter opened the door and told the woman to leave and stop messing with her stuff. She left finally. This woman really has some nerve doesn't she?
----
Yesterday (Saturday) my neighbor who I'm friends with told me that her son was shot and killed (not here). UPDATE: My neighbor said that her son was actually killed during a DUI hit and run here in Vegas. I don't know if she got the wrong info or she was so distraught when she told me that I didn't understand what she was saying.
She had a bunch of family over and they were all very upset. When two ambulances showed up while I was out walking the dog my neighbor was outside and told me about her son and that her daughter had just collapsed on the floor. One ambulance took her daughter to the hospital and one was there to check her out since she was hysterically crying and I think she had a panic attack since she was so upset. I feel sorry for the woman. Her husband passed away 3 years ago and now her son was killed. 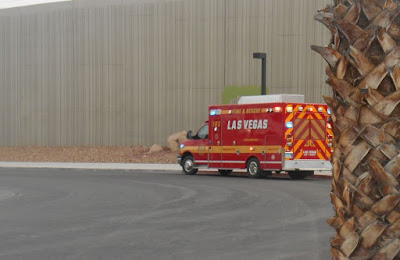