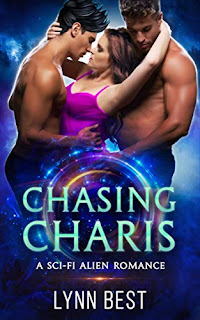 Book Description
Three smoking hot alien brothers who all want to mate with me. Whatever is a girl to do?
No matter what they tell you, alien abduction isn’t like what you see on TV.
First, I’m rudely abducted and knocked unconscious. Second, I wake up to an alien monster who wants to... er… “mate” with me, but he’s got huge claws, huge fangs, huge… everything.
I realize I’ve been taken by a race of sexy humanoid men. The bonus? They look like fitness models and they can conjure my deepest fantasies out of thin air.
The catch? I’m supposed to woo their prince and future king, and give him an alien baby. The problem is I’m more attracted to his brothers, and the dirty fantasies they show me.
On Earth, I was a good girl, but these aliens show me just how naughty I can be.
****Content warning: For readers 18 years and older. Contains explicit sexual situations, and sensitive subjects. Despite this, the story ends with a Happily Ever After.
My Review
Charis is dragged to a party she doesn't want to be at by her friend, Ginger. She talks her way out and waits outside for a ride home, only it doesn't come and instead she's kidnapped and held onboard a space ship.
Han, and his 2 brothers all have the same father but different mothers. Han is first in line to become the new King if he can find a mate and provide an heir. But if either of his brothers can secure a mate and provide an heir, they will become King first.
Han isn't at all seductive, or caring to Charis at first so when the 2 brothers try seducing her, she falls for both of them until she is abruptly shown the truth of the situation. Han isn't like his brothers, he's actually a nicer male but with his crazy, abusive mother's influence, he's slow to show how much he cares for Charis. Leaving her to believe that he really doesn't want her, she finds herself drawn to Han's brothers.
I was a little confused from the cover because I thought this was going to be a menage romance but it wasn't. I did like the story though and the ending was pretty good.
I give this book 3 out of 5 stars.
Posted by Mary Kirkland at 12:00 AM