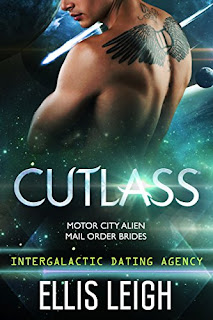 Book Description
These aliens have been looking for love in all the wrong solar systems…
Cutlass never thought he’d be stuck on some backward planet in a solar system with only one sun. Earth wasn’t his home, but he’d find a way to survive there if it meant finding a mate. He could put up with their ancient mechanical devices and a name that wasn’t his own for the right woman.
Chloe never imagined she’d sign up to be some sort of modern-day mail order bride. But too much wine and an internet connection were a bad combination, especially when the life she imagined seemed so much greater than the life she was living. Everyone stretches the truth on those dating websites, right?
One ad in a space station, one night of too much drinking, and one hotel room that will never be the same. What would you do if you found out the man from your fantasies was actually the man from your science fiction?
* * *
CUTLASS is a sci-fi romantic comedy from USA Today bestselling author Ellis Leigh. The story is a standalone rom-com with wit, snark, aliens, and more than just flirting.
My Review
Chloe works in a diner and lives in a makeshift warehouse with others who don't have enough money to rent a real apartment. One night while with her friend, she writes a letter about herself for the IG dating agency.
Cutlass is from another planet, he's an alien on Earth looking for a mate. His friends talk him into going to the IG dating agency to have them set him up with a human female to hopefully be his mate.
Chloe and Cutlass both are nervous after the dating agency tells them that they found a match for them and the way their dating agency works is they have two weeks to get to know each other and get married. If they don't match they will put their names back into the pool and try again. When the woman at the dating agency tells Chloe that they are to spend the two weeks in the same hotel room getting to know each other, poor Chloe is freaking out inside but decides to go through with it. She can always call it off if there's no attraction or sparks between them.
One look at Cutlass when he walks through the hotel room door though and Chloe knows she's going to give it a chance because he's tall, sexy and muscular. But it's the fact that English doesn't seem to be his first language and he doesn't understand everything he's saying or some of what she says. This book had me laughing so much! He gets the phrasing of some things wrong which leads to some hilarious situations. There's a pause in their relationship right as things look like they're going good because she finds out somethings about him that scare her but I really like how this book ended.
I give this book 5 out of 5 stars.
Posted by Mary Kirkland at 12:00 AM