I heard the police helicopter circling really low over my apartment complex so I headed out and saw a bunch of police 2 courtyards from mine. The police were gearing up, putting vests on, they got their shotguns out and went into the courtyard faster than I've ever seen the police go into a situation around here before. 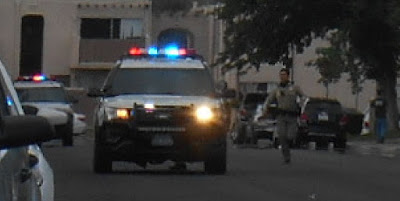 Then this police officer and 2 others started running down the street towards me and the other people who were standing around. He got down to us and told us there was an active shooter in the area and we needed to go back inside and lock our doors. So that's what I did. The police were not messing around this time. I didn't see what happened but while I was looking out my bedroom window I saw an ambulance and fire truck pull up. 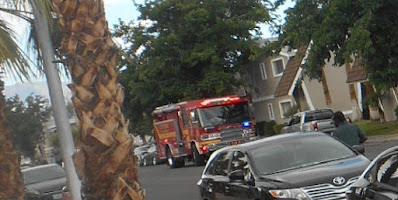 The ambulance and fire truck both pulled away within a few minutes of getting here. But the ambulance showed back up after we heard a flash bang grenade go off. I saw the coroner's van pull up about an hour later. The police were everywhere and they chased me back inside when I went out a little while later. They were telling people that they were going to be arrested if they came back out so I didn't get anymore pictures but it's sad that I'm pretty sure someone got shot by the active shooter because the guy across the street said someone was taken out in a body bag and that's why the coroner was there. Police did arrest him I heard the next day from someone across the street who was able to watch it out their living room window.
So that was my week. It's scary to think that someone around here just started shooting and it's not even the first time something like this has happened.
So that's it for this week's Apartment Hell  Life! Be sure to come back next week for more.
Posted by Mary Kirkland at 12:00 AM