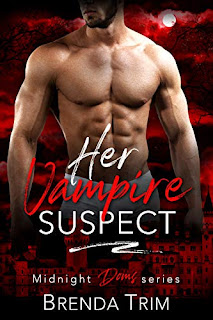 Book Description
“You’re in over your head, Agent.”
I told her not to come to the club.
The beautiful mortal on a mission.
She shouldn't be back. But women are dying, and she thinks we're involved.
FBI agent or not, she can't take on the vampire king and win.
I need to help her find a serial killer
But she won't obey me.
So I'll have to make her.
And when our enemies close in, I won't throw her to the wolves.
I’ll make her mine.
And once I own her, I’m not letting her go.
My Review
Ava is the led detective on the missing and murdered girls case that leads her to Club Toxic. Several of the women were seen there before they were kidnapped and killed.
Corbyn is working to find cures for human diseases and comes to Club Toxic to drink (blood) since he's a vampire and can easily get it there.
After noticing Ava, Corbyn scans her mind because she seems out of place at the club and he finds out she's an FBI agent looking into murdered women and is at the club to see if anything looks suspicious. Vampires don't want humans to find out about them so he compels her not to come back but to his astonishment she keeps coming back. They end up together at his house because neither of them can stop the attraction they feel for each other and Ava sees something that she shouldn't have and Corbyn wants to explain some things to her.
Ava is an FBI agent and isn't used to stopping her investigation when the leads are telling her that it's a vampire that's draining the dead women. So after she finds out that vampires exist, she demands to speak to the vampire king even though Corbyn told her that would be a huge mistake and would put her in danger. Vampires don't want humans to know about their existence so Lucius, the vampire king could either kill her, wipe her memory or something worse. What Corbyn isn't expecting is what Lucius actually does, which is help Ava find the vampire responsible.
As the serial killer case goes on, Ava and Corbyn get a lot closer and see how much they are great for each other even though they think it can't work between them since she's human and he's not. But in the end they find a way to make it work and when the killer messes up and they figure out who it is, I really liked how it concluded.
I give this book 5 out of 5 stars.
Posted by Mary Kirkland at 12:00 AM