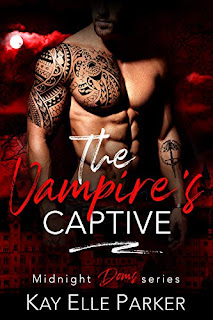 Book Description
Vienna
In the space of one night, my world is thrown into the air and dropkicked into a new dimension. Sounds dramatic, right? Probably because it is. I’m no stranger to drama, but this… this takes the award for Best Dramatic Bombshell.
It all starts with a carjacking on a dusty highway twenty miles outside Tucson, Arizona.
That’s the normal part of that night, I guess.
What happens after that…well, let’s just say I’ll never be the same again.
Colt
The moment I sense her spying on me, I know I can't let her go. She isn’t what I was expecting to find. She isn’t like the rest of the mortals. So I steal her and make her my captive.
No one knows she’s been taken. No one knows where she’s gone. No one knows what her future holds, except that she belongs to me...
Until death do us part.
My Review
Vienna walked for a long time while in the Tuscon heat after her car is carjacked and she is left without her phone, car or cash. While she's resting for a moment, she overhears and exchange between a couple of men and finds out that vampire's are real, she tries to keep quiet until the men leave but Colt catches her when she goes to leave.
Colt is undercover for Lucius the king of vampires. There's some bad guys trying to round up all the Rhonulls and either breed them to make more or sell them to the highest bidder. So Colt has a lot on his plate but he's also kidnapped Vienna and the longer she stays with him, the more he's falling for her.
Vienna is a Rhonull, her blood is addictive to vampires but they would do anything to find her and keep her as a blood slave. So when Colt drinks from her he knows that he either has to kill her to keep her from being bred and kept as a slave or he needs to try and keep her safe himself.
This book made me laugh, cringe and sigh so many times. The fact that Vienna gets high on Colt's blood and thinks she's a superhero was downright hilarious. The things she does are just so funny to read but she is also so sassy, too sassy at times. I mean, she was just kidnapped by a vampire who is telling her he might kill her and she's back talking the guy. She really needed to keep her mouth shut but she doesn't seem to have the ability to at times. The funny thing is, her sass and strength is one of the things that Colt really admires about her even though he wants her to behave and submit to him.
I thought this was going to end up being a dark romance but Colt was never really unkind to Vienna and they fell for each other really fast. When Vienna did have a way to leave, she chose to stay and protect Colt instead, which made him like her even more. When Vienna finds herself in danger, Colt is ready to kill anyone who even looks at her the wrong way. I really liked these two together and loved seeing Lucius and Selene as well as some of the other people from Club Toxic make an appearance. This was a really good addition to the series.
I give this book 5 out of 5 stars.
Posted by Mary Kirkland at 12:00 AM