This is a weekly blog post that I'm calling Apartment Hell  Life. I've mentioned a few times some of the crazy things that go on in and around my apartment complex in the past 23 years that we've lived here and people keep telling me I should write a book. But instead of a book, I've decided to share the crazy things that have happened in and around my apartment complex in the last 23 years here in a weekly blog post.
My daughter took a video when she spotted a fire in one of the garbage cans in the alley and the fire truck was in the alley putting it out. Turns out that someone had set a mattress on fire in the garbage can. 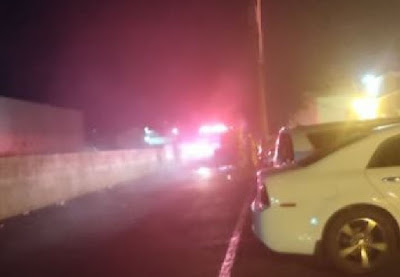 You can't really tell much from the picture other than there are flashing lights from the fire truck.
The 4th of July was another crazy one. Lots of illegal fireworks going off until well after 2am. But at least none of the tree's caught fire this year.
----
On Thursday night I was out with Falcor about 10pm and as I'm walking back to my apartment a guy on the other side of the chain link fence says, "Your dog likes to sniff the ground a lot. Well, he'll have something to sniff in a moment cause I'm fixing to take a sh*t right here."
It was a homeless guy and he was slurring his words really badly, so probably drunk. And as I passed he popped a squat but I just kept walking.
If I didn't have this dog, I would never leave my apartment. Some of my newer readers might not know that I suffer from Agoraphobia and social anxiety. I don't like going outside at all but Falcor gets me out there and sometimes we run into the weirdest of people. Thanks Falcor.
The high this week was 116f/46C
So that's it for this week's Apartment Hell  Life! Be sure to come back next week for more.
Posted by Mary Kirkland at 12:00 AM