Book Review: Deal With A Demon by Fae Owens 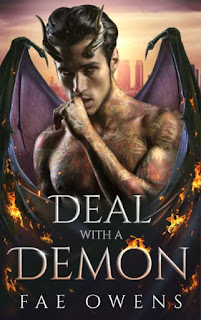 Book Description
Delilah, a succubus and petty thief, is about to make the deal of a lifetime. All for the sake of her makeshift family. She needs to take down King, the demon lord of Las Vegas, and she needs a traitor to do it. But he’s not going to help her for free. Zeke is dangerous, and he’s holding back the one thing she needs the most: the truth. Her attraction to him is magnetic but the stakes are too high to give in to temptation. It’s hard to know which is worse: being stuck in this death-trap of a city or being stuck with him. Delilah needs to use every wile to get what she wants, all while Zeke is playing a very different game. But when things start to crumble, she has to make a decision. Can she trust him?
My Review
The King of Las Vegas is a fierce demon who went by...King. A name that he gave to himself because he's just that full of himself. Zeke was tired of working for him and being abused even though he was second in command. So when he comes across Delilah stealing a rich guys wallet, he makes a proposal with her. He won't tell King about it which could get her killed if he knew and in exchange she will take him to her boss so he can strike up a deal with him. Zeke wants help killing King and Delilah's crew just signed up to help him.
Zeke gets them the ID's they need so they aren't getting in trouble being there and gets them rooms in the building he lives but Delilah stays in his place because he couldn't get enough rooms and he has the room in his place. So they end up getting to know one another really well. Zeke is a demon and Delilah is a succubus so neither one of them really trust the other one. Delilah doesn't want to fall for him but the attraction is there for both of them and they have a hard time not acting on it while they are living together.
I really liked the dynamic of Delilah's crew because they were all like family even though they shouldn't have been for various reasons. As Delilah and Zeke get closer and eventually really fall for one another we also get to know the people in Delilah's crew and they all have their own secrets. But Zeke has a huge secret that does come out in the end and makes a lot more sense as to why he has stayed working for King even though he hates the demon.
If they thought that killing King was going to be easy they were so wrong. He's much more stronger than they thought and he has some very sadistic demons working for him.
I really liked this book. It was a little different than I thought it was going to be but in a good way. I loved the romance between Delilah and Zeke because they both turned out to be so much more than I first thought they were. Some secrets about the fall when demons were born were left open but I'm sure we will get more answers in the next book. I look forward to getting to know all of the secondary characters because they were all interesting.
When I read the blurb for this book and saw that it was set in Las Vegas, I wanted to read it right away since that's where I live. I love reading books set here and this was such a fun book to read.
I give this book 5 out of 5 stars.
Disclosure: I was given an e-ARC of this book for free via BookSprout but all opinions and thoughts are my own.
Amazon
Posted by Mary Kirkland at 12:00 AM