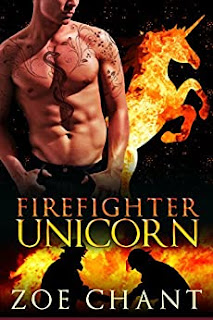 Book Description
Sarcastic. Short-tempered. Definitely not sparkly.
Paramedic and firefighter Hugh Argent is no one’s idea of a unicorn, and he’s careful to keep it that way. His life depends on hiding his secrets…and on never meeting his true mate.
Outcast. Unwanted. Untouchable.
Ivy would give anything to be touched, just once. But as a wyvern shifter, her skin is lethal even in human form. Targeted by a shifter crime boss for her deadly abilities, Ivy finds herself in trouble over her head…and pulled out of danger by a cranky, mysterious, and jaw-droppingly gorgeous firefighter. Literally pulled out of danger.
For the first time in her life, someone can touch her…
Caught between protecting his secrets and protecting his mate, Hugh struggles not to reveal how Ivy penetrates all his spiky defences. The more he gets to know this brave, fierce, infuriating woman, the more he longs to claim her.
But a unicorn can only take a mate at a terrible cost…
My Review
Hugh is a firefighter and he's a shifter like the rest of his team but most of his team have no idea what kind of shifter he is and he has to keep it that way. If people found out what he is, he might be hunted.
Ivy is a wyvern shifter and can't control her deadly venom. She can't touch anyone and no one can touch her because she could kill them or make them really sick. Her little sister who is disabled lives with her and she takes care of her as best she can.
When Hope, Ivy's little sister makes friends with people that are not what she thinks they are, Ivy finds herself in danger because the leader of these new friends wants Ivy to work for him. He isn't going to take no for an answer and Ivy finds herself and Hope in trouble. So when the shifter firefighter's come to their rescue, they don't care for Ivy because she has a bad reputation of hurting people with her venom. But Hope was hurt and Hugh, the paramedic with healing gifts helps Hope. But when Hugh and Ivy get a look at each other, they know they are mates and neither of them are really happy about that.
Hugh has a huge secret and there's a secret reason why he can never take a mate. So even though he feels the mate bond and is attracted to Ivy he knows he has to keep her at arms length for both of their sakes.
Hugh is a gruff, ill-tempered and always seems to be in a bad mood but that's mostly because he's always in pain from being around people. I'd be cranky too. You wouldn't think that Hugh and Ivy would make such a great couple but as this story unfolded, my heart broke for both of them. They've both has such hard lives but the end of this story was one of the best happy endings I've ever read. You can read this as a standalone but there are quite a few spoilers about all the different couples from the first few books so I would read this series in order.
I give this book 5 out of 5 stars.
Amazon
Posted by Mary Kirkland at 12:00 AM