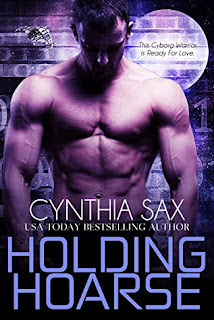 Book Description
Hoarse hasn’t found his female, the one being manufactured for him. There is only one reason he can process for his lack of success—he isn’t yet worthy of claiming a female.
The big C Model is determined to change that status. He considers ulu, or doll, fabrication to be an essential part of mate preparation. Seeking to hone his skills, he contacts a reclusive doll maker and asks her to train him.
He doesn’t realize the being he is sharing his deficiencies with is his destined mate.
Arlicia desires a male whose face she has never seen. Her new trainee’s persistence, intelligence, and curiosity warrant admiration. His deep voice evokes visions of passionate kisses and heated embraces. His large hands cause her to quiver with wanting.
Before their professional relationship ends, she wants to rendezvous with Hoarse. The curious doll maker hopes for a glimpse of the huge warrior.
When a cyborg intent on being the perfect mate meets the female who knows all his secrets, garments are shed, illusions shatter, and beings die.
*
Holding Hoarse is a short, light, companion story in the Cyborg Space Exploration series and is meant to be read after Testing Truth.
It is also a BBW Cyborg SciFi Romance featuring an intense C Model warrior, an understanding doll maker, and packs of imperfect toys seeking loving homes.
My Review
Hoarse is a cyborg and like other cyborg's, he hopes to find his female someday. So after he finds an Ulu or doll, he contacts the doll maker and asks her to mentor him so he might be able to make the dolls for his friends kids and hopefully his own kids someday in the future.
Arlicia makes dolls for kids and keeps to herself. When Hoarse contacts her and asks her to teach him how to make the dolls, she agree's even though she has never done this before.
She keeps her whereabouts a secret and for a long time only teaches him through text and sent pictures, never letting him see her face. Then when they get to a harder part she opens a video with him so she can show him in real time how to apply the hair to the doll. When Hoarse hers her voice he knows that she is his female and feels bad because he's shown her all of his deficiencies over the time that they have been texting. He doesn't feel worthy of her when they meet but she tells him that he is and that makes his heart soar.
She doesn't know what he looks like but they agree to meet where she is going to distribute the dolls to a bunch of kids. When she is attacked, he comes to her rescue and she gets her first true look at him. She knew he would be big but she didn't realize just how big. There's some killing because he was made for killing and the men had dared to threaten his female. I've read a few of the books in this series and I like how these cyborg's are so fierce. They were made for battle and they don't shy away from spilling blood to defend the people they care about.
Arlicia is great. She and Hoarse are such a great couple. The cyborg's are brutal but they can also be so sweet, it's quite the contrast and I really enjoy seeing both sides of them. This book was so good. I will definitely have to read more of these cyborg's in the future.
I give this book 5 out of 5 stars.
Posted by Mary Kirkland at 12:00 AM