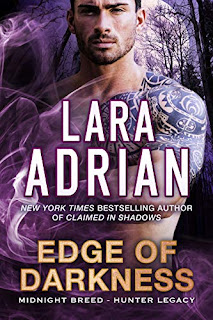 Book Description
Hunters. The most lethal Breed vampires in existence--and Knox's cold heart thaws for no one . . . until a strong-willed beauty enlists his help in protecting an innocent child from a powerful, small-town family and a chilling evil that knows no bounds.
As a survivor of the horrific Hunter program, Breed vampire and former assassin Knox is a solitary man, closed off to the pain of love--and loss. A loner by choice, Knox deals in death and dark justice, expecting nothing in return. Until one snowy night he drifts into a remote town in northern Maine, where a determined beauty enlists his lethal assistance, tempting not only his hunger, but his wounded heart as well.
Lenora Calhoun has lived in tiny Parrish Falls all her life. Owner of the local diner that’s been in her family for generations, Leni’s as stalwart and stubborn as the tall pines that surround her. That unshakable resolve doesn’t sit well with everyone, least of all the most powerful family in the logging town. Leni’s been the target of their animosity for years, but with their escalating threats now putting an innocent child’s safety at risk, she takes a desperate chance on a dangerous stranger--a man who is something more than human. Knox’s deadly skills and turbulent gaze should be warning enough for Leni to guard her heart, yet she cannot deny the yearning he stirs in her blood. For the merciless Breed male is the only man she can trust in a town full of secrets, and where taking a stand could rip away everything she holds dear.
Book 3 in a brand-new Midnight Breed spin-off series of standalone vampire romance books that can be enjoyed in any order. Complete HEA and NO cliffhangers!
My Review
Knox has been on the road ever since he lost someone close to him. He doesn't want to get close to anyone else at this point but when he meets Leni in her diner, he's drawn to her.
Leni is in her diner when Knox comes in from the cold just to warm up a bit. She knows he's a Breed when he takes off his gloves and spots the glyphs on his hands. He's a vampire Breed from the Hunter program. He's a trained killer but she's not scared of him.
Knox is sitting in Leni's diner, just trying to warm up a little before moving on when a couple of guys come into the diner and give Leni a hard time. Leni is raising her 7 year old nephew and his father is getting out of prison soon. Her sister was brutalized by Travis but then pressed charges against him when she found out she was pregnant. But she went missing after she gave birth and Leni hasn't heard from her sister since. The father's family doesn't like Leni because she's keeping the child away from them. Knox tells the guys to leave and then he walks away only to find that someone attempted to kill her later that night by pushing her car off the road. Knox saves her and goes back to her house to make she she and her nephew, Riley are safe. But he finds as he looks around that her house isn't very secure and he takes it upon himself to install new locks on her doors and windows. Leni let's him stay in the room in the attic and they find themselves getting closer after he finds out that she has the Breed mate mark.
But when Riley's biological father, Travis gets out of prison he lets Leni know that either she let's him be in the kids life or he'll take her to court and take Riley away from her. Since Travis's family has a lot of money and pull in that town, she knows that she'd lose Riley if it came to that. After that Knox does whatever he has to in order to keep her safe. We meet a couple of the other Breeds that come to help when Knox calls to enlists the help of The Order.
Travis and his family are even worse than I could have ever imagined and when the horrible secrets they and others in the town have been keeping come to light, we get what I can only describe as a satisfying conclusion to this book.
I give this book 5 out of 5 stars.
Posted by Mary Kirkland at 12:00 AM