This is a weekly blog post that I'm calling Apartment Hell  Life. I've mentioned a few times some of the crazy things that go on in and around my apartment complex in the past 24 years that we've lived here and people keep telling me I should write a book. But instead of a book, I've decided to share the crazy things that have happened in and around my apartment complex in the last 24 years here in a weekly blog post.
My neighbor was yelling at someone down the street. Before I started recording, she went back into her apartment and brought out a bat and was swinging it around. She has it in her hand and you can hear it drop on the ground at one point. Nothing else happened and she went back inside soon after I stopped recording. But she sure was mad about something. I couldn't really understand what she was saying but if you turn your sound up you can hear her yelling and cussing. The sound goes in and out a little because the wind was blowing. The weird bright line is because I was facing the sun and it was reflecting off of the metal part of my window frame. There was nothing I could do about it.
---
Rental costs have gone through the rook here lately. I looked around at apartments to see if there are any in my price range but the prices have jumped pretty high. They are asking $800-$900 for a studio and 1 bdrm apartments are even more. That's even in bad neighborhoods. The prices are even higher right now because so many renters didn't pay their rent last year because of Covid and the eviction moratorium so when the moratorium was lifted, people just moved out and didn't pay their back owed rent and landlords are trying to recoup all those costs by raising everyone else's rent. My rent just increased from $625 a month to $890 a month. Thankfully I can still pay it but that's a huge jump and rental prices are high everywhere I look. It's kinda mean spirited to punish those of us who paid their rent each month last year by increasing it so much. But that's just my opinion. 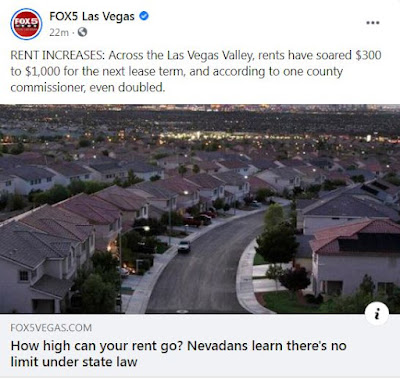 *This was just one news headline this week. Rents soared here*
I would move after this increase but it's still hard for find an apartment cheaper than this one and I would just be moving into another bad neighborhood for rent around the same amount. So I am signing another 1 year lease.
---
On Tuesday I received a notice and a warning on my door from management that my satellite dish was going to be removed. I've never had a satellite dish so I called the office and she fixed the warning on my account. I worried about it because after 3 warnings for breaking the lease rules they evict you. Just more BS to deal with. But next week all of the satellite dishes are being removed from the property because they are damaging the roofs. It's in our leases that we are not allowed to have satellite dishes so they can't do anything about them being removed.
The high this week was 90F/32C
So that's it for this week's Apartment Hell  Life! Be sure to come back next week for more.
Posted by Mary Kirkland at 12:00 AM