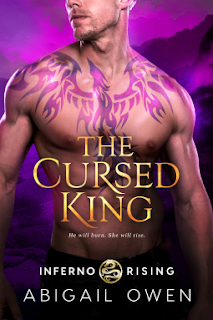 Book Description
Airk Azdajah, the rightful King of the White Clan of dragon shifters, spent half a millennium being tortured by the false High King Pytheios. The only reason he’s alive is a curse— the man to kill Airk will be consumed in his own fire. Which is why Pytheios kept Airk alive, barely, unable to shift in his prison cage, driving the creature half of him into madness. Airk escaped, but he'll never be truly free. What good is a king who can never let his feral dragon loose, never fly, and never lead his people? He's better off dead.
Angelika Amon is the last unmated phoenix. The problem? She has no powers. Zip. Zilch. Angelika hates being dormant, especially now that her three sisters are blissfully mated to powerful dragon shifter kings and are very much part of the fight to take down the rotting king Pytheios, their parents' killer. What good is a useless runt of a phoenix in a battle to save the dragon kingdom?
Desperate to find some way to help, she offers herself to Airk as a mate — just for political leverage. But a dormant phoenix is no damn use to him just like a dragon who can't shift is no use to her. Until Pytheios sets his sights on Angelika for himself...
My Review
Airk spent 500 years locked in a dungeon being tortured and wasn't able to shift into his dragon. But now that he's been rescued and is a prisoner no more, his dragon is feral and dangerous so he can't shift and let the monster out even now. Airk is the rightful king of the white dragon clan but most people are either scared of him, don't believe he is who he says he is or won't go against Pytheios.
Angelika is a phoenix shifter like her sisters but she isn't able to shift and has no powers so she offers to mate Airk out of a sense of duty so Airk would have some leverage to get people to follow him. Airk says no though and even though Angelika has feelings for him, she doesn't let that stop her from trying to change his mind.
Because Airk feels like he's dangerous and can't shift, he doesn't plan to take on a mate but Angelika is persistent and they both have feelings for each other. Because she doesn't give up trying to help him and wanting to show others that she can be of use as well, they are thrown together on many occasions, getting to know each other better. Airk has feelings for her but is afraid his dragon will take over and hurt or kill her even though his dragon feels protective and content around her.
Airk was frustrating at times though because he said no to her so many times so I was happy that she didn't give up and kept going after what she wanted. So Airk tries to talk some of the white clan into turning their support away from Pytheios and Angelika helps him. It was nice to watch them get closer and it was wonderful to see the characters from the other books make an appearance in this one as well.
This is the 4th book in the Inferno Rising series and I would definitely suggest you read this series in order for it to make more sense. This book also wraps up this series in such a magnificent way even though I was sad to see it come to an end.
I give this book 5 out of 5 stars.
Disclosure: I was given an e-ARC of this book via NetGalley but all thought and opinions are my own.
Posted by Mary Kirkland at 12:00 AM