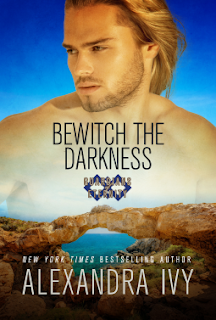 Book Description
Only one drastic mission can tempt Kyi away from the peaceful woodland where the dryads raised her: killing her mother. Xuria’s beauty masks a bone-deep evil that has enslaved fey for centuries with the help of a powerful stone. A hundred years ago, Kyi almost succeeded—until one meddlesome vampire destroyed her chance. With rumors that Xuria has emerged from her secret realm, Kyi’s determined to try again—despite the vampire who is now focused on destroying her.
Locke has been waiting over a century to avenge what he believes was Xuria’s death. Discovering the sorceress’s raven-haired fey daughter was the assassin is a surprise—until her story of Xuria’s treachery begins to ring true. Working with Kyi is one solution—and the relentless heat simmering between them is a hint that they may be fated as mates. But even a destined love will have to wait as they now struggle to defeat Kyi’s twin sister, who has a chilling plan of her own . . .
My Review
Kyi has been in hiding for a very long time. But she needs to go after her mother, Xuria and stop her because she'll never be safe until she does.
Locke is still grieving the death of his mate and has been waiting to get justice for her and revenge on the one who killed her. But things don't go as planned.
Locke thought his mate had been killed but when he's informed that it was all a trick of magic that Kyi's mother had done to him, he's skeptical at first and then comes to believe her more and more. He had locked himself away, waiting for the day that he was alerted that the killer was close once again. But what he finds is Kyi and she convinces him that her mother used magic to trick him into thinking what she wanted him to think.
Kyi has a twin sister, Cleo but they aren't close. Kyi is a kind, sweet woman while Cleo seems to be the exact opposite. Cleo doesn't even trust her own sister but wants to get revenge and kill their mother, Xuria for killing their father and trying to kill them when they were just kids.
There's actually three simultaneous storylines going on in this book. Inga and Levet are on a quest, Locke and kyi are trying to find Xuria so they can kill her and Troy and Cleo are also also trying to find Xuria to kill her.
Xuria uses magic to keep herself immortal and uses other beings as slaves, using their life energy to fuel the magic she uses to keep herself immortal. She's not a nice person and now several people are after her to kill her which makes her even more dangerous.
Cleo wants her mother dead but she let's her plan be known that she wants the crystal that her mother uses for her own use after she kills her. Troy is only there because he was tricked into owing Cleo and he can't get out of it until he pays the favor back but he knows she's not out for good reasons.
Having all of these storylines going on at the same time made sense in a way but it also detracted from the main couple's romance which I didn't like. Locke and Kyi seemed to fall for each other too fast while they were trying to catch up to Xuria. I like this series but this wasn't my favorite book. I did like the ending though because Inga deserved to finally have something good happen in her life.
I give this book 3 out of 5 stars.
Disclosure: I was given an e-ARC of this book via NetGalley but all thoughts and opinions are my own.
Posted by Mary Kirkland at 12:00 AM