Last week the guy that lived in the second apartment in from the end of the building, moved out. He had some of the druggies from drug dealer's apartment helping him move his boxes to the moving truck. And when he was done he either left the apartment open to the druggies who were squatting in the apartment or they broke in knowing he wasn't there anymore and they were there all weekend and into Monday. My daughter and I saw them coming in and out of the apartment. So when Monday came around the maintenance man went into that apartment and kicked out all of the squatters, changed the locks and screwed plywood over the door and windows so the squatters couldn't get into the apartment again. I watched him kick out at east 6 people from that apartment.

The only reason I didn't call the police is because I have before for situations like this and unless there's a manager on site or that they can get a hold of to verify that the people don't live there, the police won't make them leave. So there was no reason to call because the police won't do anything.
--- 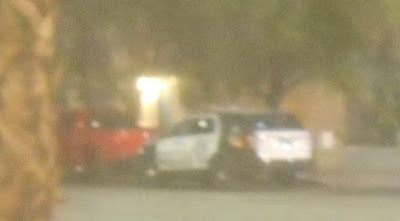 Around 10pm one night I spotted a police car across the street. The cop sat in the car for about 2 hours. I don't know why but I didn't see anything else going on.
---
The other day I was walking Falcor and he started barking at one of the tweakers from around here. He looked at Falcor and said, "You don't need to bark, your momma is safe. No one around here would mess with her"
Now I could take that two ways, either he thinks I'm such a badass (I'm not) that no one would mess with me (hahaha)...or, he thinks it's not such a bad neighborhood and I'm safe when I'm out at night walking the dog.
I know he didn't mean it this way but I'm going to be believe that he thinks I'm a badass (I'm not). lol
---
I thought this week was going to be pretty uneventful until Friday night at 8PM came around. Then this happened. You have to wait a few seconds but then the police car drives by and you can see a light which is the police helicopter. You can hear the helicopter overhead and hear the police car siren for a second.
The police had my street blocked off at both ends and the police helicopter was flying directly overhead. If you turn the volume up you can hear the police helicopter, it was flying close and was loud. I don't know what happened but it was two courtyards away from me in my apartment complex. Whatever it was, looked intense. I didn't go outside since there were so many police around so I filmed this from my bedroom window.
The high this week was 75F/23C
The low this week was 45F/7C
So that's it for this week's Apartment Hell  Life! Be sure to come back next week for more.
Posted by Mary Kirkland at 12:00 AM