Book Review: Auctioned For Her Blood by Mara Leigh 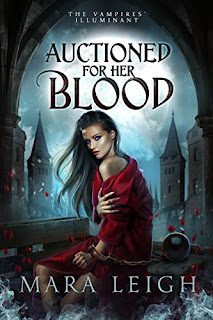 Book Description
Never go out after dark.
There's a secret in my blood. My mother died to protect me from dark magic, and I've played it safe for the past ten years, never going outside after the sun sets. But I can't live like this anymore. I don't want to die alone and a virgin.
One wrong turn and I find myself on an auction block where two wealthy, powerful men bid their fortunes for a night with me.
I can't deny that I'm drawn to both the cultured intellect and the dangerous bad boy. With them, I'm whisked into a glamorous world of powerful vampires, wild creatures, dark secrets and darker desires.
The secrets held deep inside me are going to come out. All I can do is trust the men I'm falling for to protect me from the danger hunting me.
Auctioned for Her Blood is Book 1 of The Vampires' Illuminant series. Expect a steamy, exciting story, where the heroine falls for more than one man and doesn't have to choose.
My Review
Ember was just a kid when her mother made her go into the magically concealed basement to hide from those bad people who were looking for her. But when her mother disappeared that night she knew her mother was dead and had died for her, to keep her safe. From that moment on she did as her mother had told her to do and never went out after dark in order to keep herself safe. Until one night she can't help but be out after dark for a work event.
Meeting Zuben changed her life but then meeting Ryker also changed her life but not in bad ways. She now knows that things are not always what they seem and there's a lot more to be seen than she ever knew. Vampires exist and while some are bad, Zuben and Ryker and not the bad kind. At least she doesn't think Zuben is a bad vampire but the people he works for are not good so he tries to keep her safe from them because if they found out what she is, they would keep her locked up and experiment on her.
I was really liking this book when it abruptly ended on a cliffhanger. I was not expecting that and it really ruined the book for me.
I give this book 2 out of 5 stars.
Amazon
Posted by Mary Kirkland at 12:00 AM