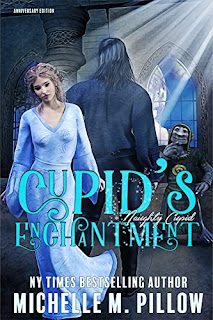 Book Description
Contrary to popular belief, Cupid is not a cute little cherub. And he’ll take revenge on any who say differently. Just ask Ilar, Commander of the Lycaon guard…
Lady Rhiannon’s beauty is distracting suitors from her older sister and ruining her chances at marriage, so her father has her locked her away in a tower. Believing she is going crazy from the isolation, Rhiannon hears a frightful voice. The next thing she knows, she wakes up in a strange forest pursued by mythical wolf men. And, worst of all, their leader is taking her home with him.
Ilar is irritated to discover an enchanted female—a human, their ancient hunters—disrupting his Lycan Guards. One sniff of this mortal’s enchantment and the men go insane, trying to kill each other for her hand. Ilar has no choice but to break the spell by claiming the female as his own. But who knows what will happen when Cupid’s Enchantment is broken?
My Review
When the Lycan, Ilar insulted Cupid, he decides to get revenge in what he thinks is the perfect plan. But Cupid isn't a cute little arrow shooting cherub. He's actually a nasty little troll who thinks that the beautiful Rhiannon is the ugliest female he could find. His revenge is to put a love spell on her and make the Lycan's go crazy over her, fighting over her. But the Lycan's can see that she's beautiful and Ilar being in charge has to keep her safe after she is kidnapped and sent to his world with no idea how she got there.
Rhiannon is human and could easily be hurt or killed from the Lycan's so Ilar locks the fighting Lycan's up and keeps Rhiannon sequestered in his room for the most part. While Ilar tries to figure out who she is and how she got there and why his men seem to want her for themselves, he has to spend time with her and they get to know each other which doesn't help keep him from wanting her for himself.
As they get closer to the truth as to who put the spell on her and why, they are falling for each other. I had to wonder if they would still want each other after the spell is broken. There were a few twists in this that made it even more interesting to read. I was happy with the ending. Sure made me think of Cupid in a different way. It was a fun read.
I give this book 4 out of 5 stars.
Amazon
Posted by Mary Kirkland at 12:00 AM