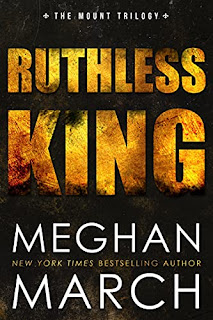 Book Description
Get ready for the darker and dirtier side of New Orleans with an anti-hero romance from New York Times, Wall Street Journal, and USA Today bestselling author Meghan March.
New Orleans belongs to me. You don’t know my name, but I control everything you see—and all the things you don’t. My reach knows no bounds, and my demands are always met. I didn’t need to loan money to a failing family distillery, but it amuses me to have them in my debt. To have her in my debt. She doesn’t know she caught my attention. She should’ve been more careful. I’m going to own her. Consume her. Maybe even keep her. It’s time to collect what I’m owed. Keira Kilgore, you’re now the property of Lachlan Mount.
Ruthless King is book one of the Mount Trilogy.
My Review
Keira finds out that her late husband owed a debt to Lacklan Mount, the mobster of New Orleans that everyone is afraid of. Keira is just trying to keep her family business up and running and then Mount let's her know that she has to pay back the debt that her husband owed him but he doesn't want money, he wants her.
Lackhlan Mount is the underworld mobster in New Orleans and he's not a nice guy. People fear him for a reason and now his sights are set on Keira and she has no idea what's about to happen.
Keira thinks that she can just sleep with Mount and that will satisfy the debt and she's ready and willing to do just that. But Mount is not letting her off that easy, he wants her to submit to him, be his slave, to own her. Keira puts up a bit of resistance but it's mostly just talk on her part because she really has no backbone at all. Instead of going to the police, FBI, or some kind of official she let's herself get caught up in Mount's plan for her.
Mount wants to own Keira and does everything he can to make that plan succeed. He stalks her, leaving her notes, tells her what to wear, how to act ect. I was looking for some hint of decency in him and found none. I kept reading because I figured in the end he would realize that he has feelings for her or something but we never get to that point because this book ends on a huge cliffhanger!
There's no closure at all, everything is left open like the book just stopped halfway through where it should have. Frankly, I don't understand how this book has any good reviews when it ends on a cliffhanger. I expected an entire book with an ending and didn't get that. Plus the heroine has no backbone and the hero is a jerk. I know this was an anti-hero romance but it's still a romance and I didn't see one ounce of hero in Mount at all. Very disappointed.
I give this book 1 out of 5 stars.
Amazon
Posted by Mary Kirkland at 12:00 AM