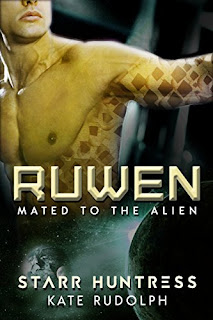 Book Description
Ru’s species is cursed. He’ll be dead by his next birthday if he doesn't find his mate...
Ruwen knows he's a goner. His alien species is cursed by a deadly genetic quirk and he'll be dead before the month is out, unless he finds his fated mate. She's the only woman in the universe who can save him. It's too bad that most Detyen women are dead. But could he find hope with a human?
Abducted, ditched, and on the run from vicious aliens...
After being kidnapped from Earth by unknown foes, Lis has been dropped on a inhospitable planet with little food and no hope. She'll do anything to find a ship to take her back to Earth, but Polai is hostile to all alien life, and Lis is running out of places to hide. Can she trust the alien who looks at her with heat in his eyes?
An impossible chance...
From the moment he sees her, Ru knows Lis is his mate. But she's already wounded and distrustful of aliens. How can he prove that he’s trustworthy? If he can’t overcome Lis’s fears, their bond will break before it has a chance to form, leaving Ru dead and Lis all alone in a hostile galaxy.
Detyens are doomed to die young if they don't find their fated mates. The Mated to the Alien series can be read in any order and there are no cliffhangers!
Get your taste of these fated mates in ebook, audio, and print!
My Review
Ru knows that he doesn't have long time to live because he hasn't found his mate. So he's taken one more mission and hopes to complete it so he can collect the money and live out his last days in peace. But while on his mission he finds a human female that was mistakenly kidnapped and brought to this alien planet and left. He knows right away that she's his mate but she doesn't trust him at all because of the ordeal she's been through.
Lis has been on her own ever since she was kidnapped and left on the alien planet. She tried to get help from the aliens who lived there but they aren't friendly at all so when Ru finds her and tries to help her, she's not willing to trust him at all. He has to blast her with his stun weapon and bring her back to his ship in order to place a translator on her so they can communicate.
All she wants is to go home but he knows if he can't get her to accept him as her mate that he will die. He's not going to tell her that though and asks her to give him a chance in the time it takes for him to get his mission completed. She agrees to give him a chance while they are together but she actually starts to feel something for him pretty straight away and she doesn't understand why. He doesn't really explain why she might feel something for him or about how he'll die if she doesn't agree to be his mate.
Watching them get to know each other and fall for each other was really fun to watch. But I would have liked more of a back story as to what Lis endured after being kidnapped since we were just told is was bad but not what happened. I would have liked more of a back story on both of them as well to get to know them both better. But this was a fun little alien story.
I give this book 3 out of 5 stars.
Amazon
Posted by Mary Kirkland at 12:00 AM