Book Review: Wolf in the Night by N.J. Walters 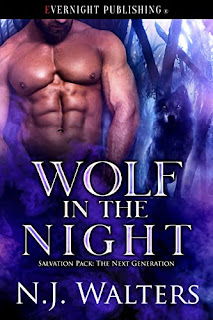 Book Description
Driving home from a trip, Emma Matheson is run off the road in an abduction attempt. Seems the alpha of her father’s former pack never forgave his defection. To settle the old score, he plans to force her to mate with a male of his choosing—his son, Dmitri.
Dmitri Gribkov wants no part of his father’s revenge. A loner by choice, nothing has prepared him for sexy, stubborn Emma. He’ll do whatever it takes to protect her—even if it means losing her.
Determined to control her destiny, she does her best to escape, even as the attraction between her and Dmitri sizzles. Doesn’t take long for her to realize this huge, sexy wolf is a protector at heart.
Tracking and killing are what he does best. Before this is over, he’ll have blood on his hands, but winning her love will be the hardest battle.
My Review
Dmitri and Emma meet right after she is driven off the road by another car. The men who get out of the car are from her father's old pack and their alpha has sent them to kidnap her and bring her back so she can mate with his son, Dmitri. But Dmitri doesn't want this and has been tracking these wolf shifters to stop whatever his father sent them to do. He doesn't even realize that Emma is also a wolf shifter right away but he knows he has to save her and stop the men.
Dmitri gets Emma into his truck and takes off while the other wolves are in hot pursuit but they get a bit of a head start. Emma isn't sure if she can trust him and when he tells her who he is, she's even less likely to trust him. She tries to flee when the timing is right but he's able to catch her and bring her back fairly easy. it takes a while before Emma starts to believe that he's trying to save her and not bring her back to his father. Emma convinces Dmitri to let her call her father and the alpha of her pack and they tell her and Dmitri that they should head there to them. But Dmitri isn't sure it's a good idea, not knowing if they can win in a fight against his father and the pack of guys he has. Plus he's not sure her pack will trust him enough to give him a chance and he's not leaving Emma now that he knows she's his mate. The pull and the attraction between them is off the charts and he's not giving her up without a fight.
Her father and the alpha are skeptical of him at first but he proves to them that he's who he says he is and cares about Emma. There's a huge fight when Dmitri's father thinks he can overpower not only his son but Emma's pack. I had a great time with this book.
I give this book 5 out of 5 stars.
Disclosure: I was given a free e-ARC of this book via NetGalley but all thoughts and opinions are my own.
Amazon
Posted by Mary Kirkland at 12:00 AM