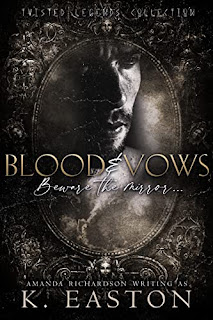 Book Description
Never make a deal with the devil–especially if that deal entails holy matrimony. There’s only one rule my mother passed down to me before she died: Never venture into the east side of Edinburgh.
I never questioned it.
There are creatures in this world that could hurt us, she’d said. So, I stay away—until my life hits rock bottom, and I find myself curious about the forbidden side of the ancient city.
It doesn’t seem all that different here–bars, clubs, restaurants. Just like the human side. One too many drinks later, he finds me. A silly poem and a whispered wish are all it takes for him to rip through the mirror between realms and pin me against a wall. Cruel, inhuman, cunning. A demon—an actual prince from hell. With horns. What could he possibly want from me?
Marriage, apparently.
Because as it turns out, Bloody Marius is dead serious about upholding his end of the deal.
Blood & Vows is a dark retelling of the legend of Bloody Mary. It is a paranormal romance novella that will leave your kindle sizzling. Please note that this book has dark themes such as forced marriage, kidnapping, dubious consent, violence, and explicit language, which may be triggering for some.
My Review
Liz was told by her mother not to go to the other side of the city, it's dangerous. But after her mother dies and her life starts going down hill fast, she decides to throw caution to the wind and go there anyway. Not knowing that her life is about to change in ways that she never could have imagined, she doesn't realize that she might be in danger until it's too late for her to do anything about it.
When Marius comes through the mirror and claims Liz is his soon to be wife, she's not sure what's going on. Unfortunately Liz's mother made a pact with the devil, quite literally and now she has no way of escaping Marius because he's a powerful demon and can just make her come with him if she won't go of her own free will.
The secrets that were kept from her were revealed to her and the twists that come are quite exciting. At first she thinks she's going to just be his slave but when he slowly reveals that he isn't really a bad guy, and she starts to get to know him, they get along a lot better. The romance was so sweet and spicy at the same time which was fun to read. I wasn't too sure about him at first but I ended up really liking him. I think she was really good for him too.
I was mad at Liz's mother though. She should have told her why she didn't want her to go to the other part of the city. But this ended up being pretty good for a novella so I will forgive the mother.
I give this book 4 out of 5 stars.
Amazon
Posted by Mary Kirkland at 12:00 AM