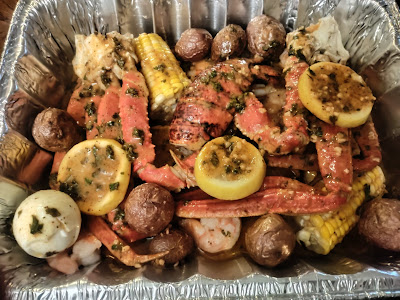 Crab boil
So this is my daughter's favorite thing to make and have for dinner. I think I might have shared pictures before of the crab but not everything together. This is for 2 people. I did not have any red potatoes so that made mine low carb. I know some people add different kinds of sausage like Andouille or kielbasa but I don't like that. You can add that if you like.
You will need

2lbs of crab legs
1lb of shrimp
1 lb of scallops
2 eggs
2 ears of corn
2 lemons, halved
1/2 cup Old Bay Seasoning
1stick of butter
Several small red potatoes for those who eat them
3 TBSP cilantro
What to do.
Bring a large pot of water to a boil. Drop potatoes, lemon halves, Old Bay Seasoning, eggs and corn into boiling water. Boil until potatoes are done. While you are waiting, add 2 TBSP of butter to a pan and add shrimp and scallops with a little more Old Bay Seasoning. Cook until done but do not over cook. Remove shrimp and scallops from pan. Add the rest of the butter to the same pan. Once melted add about a tsp. of Old Bay Seasoning and a pinch of salt. Stir and add diced cilantro. Remove after mixing thoroughly and use as a sauce for your food.
Remove eggs from boiling water and add crab. Boil for about 10-15 minutes. Remove everything from water and add to plates.
You can put the scallops and shrimp in the boiling water if you want but to me it tastes better cooked in butter.
Posted by Mary Kirkland at 12:00 AM