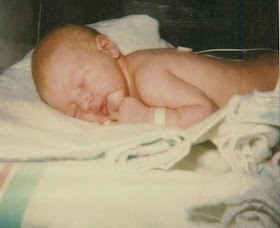 *A picture of my daughter the day she was born*

WARNING!
This post is very graphic and contains information of a surgical procedure and medical aftercare. If this type of information makes you queasy, you might not want to read this post.

In my article I had to cut a lot of things out because of the word count requirements for this article, things like me having morning noon and night sickness for a full 9 months and not being able to stand for more than 5 minutes the entire 9 months without either fainting or vomiting and being 2 weeks over due and given a Pitocin IV to make me go into labor, which didn't work for me and they sent me home. They talked about scheduling a C-section if I didn't go into labor within the next few days but the next day I did go into labor.

For 12 hours I had contractions on and off every 30 minutes and then every hour and finally every 10 minutes. When my husband go off of work we took our bag and headed for the hospital but made a detour on the way and stopped at 7-11 so he could get a pack of cigarettes *yeah I never let him live that down* and that's when the really hard contractions hit me and started coming every 5 minutes apart.

When we got to the hospital I could barely make it up to Labor and Delivery because every couple of minutes I was bent over in pain and when a hard contraction hits you, you can hardly breathe, let alone walk.

Once I got up to my room and was set up in bed, they had to break my water because it hadn't broken and that's when things went from bad to worst. The fluid when your water breaks it supposed to be clear...mine wasn't it was dark brown because of the Meconium.

Meconium is the earliest stools of a mammalian infant. Unlike later feces, meconium is composed of materials ingested during the time the infant spends in the uterus and is the first thing to end up in their diapers after they are born. My daughter's first Meconium ended up in the placenta with her and she aspirated it, which sent the bells and whistles off on the machines as her oxygen dropped dramatically and I was told I needed to have a Cesarean.

I was prepped for the surgery and was given a Spinal shot of anesthetic instead of the usual Epidural. With an epidural the tube is left in your back much like an IV and they slowly give you the medicine, but they wanted me numb right away so I was give a Spinal anesthetic where nothing is left in your back, that took effect right away and lasted for hours. I think the anesthetic they gave me to numb the area before the Spinal hurt way more than the Spinal itself. Lidocaine burns as it goes in and that's what they inject you with most time for stitches or if you're having a biopsy.

The one thing I didn't like was when I was laid down on the table, they strapped my hands out on the bars of the table. They said so I didn't move or try to pull anything during the surgery, but it was still scary.

After they got my daughter out, she had two seizures because of lack of oxygen due to aspirating meconium, but after several tests they told me she was fine..and she was.

But because of the meconium, my cesarean incision became infected and my husband had to learn how to pack it with gauze and rip it out three times a day until it healed...which took a month. The procedure is to wet several pieces of gauze, enough to fully pack the incision *mine was deep enough for Ken to put his entire hand down into* dip the gauze into sterile water and pack the incision then put a large piece of gauze over the opening and secure it with surgical tape. Then three times a day after the gauze has dried on the infected areas, you slowly rip it off the exposed flesh, the infected flesh gets ripped off with the gauze.

Imagine you have a deep cut and you have to let a piece of gauze dry to the red, fleshy, exposed flesh under the skin and rip it out several times a day until it heals. Yeah, not fun.

I wasn't sure if I would have as hard a time with another pregnancy and I didn't want to chance it, so I only had the one child and once the terrible two's started..I knew I had made the right choice. LOL

Now my daughter is pregnant and her pregnancy was the total opposite of mine, she didn't hardly even have any morning sickness. Glad she's having such an easy pregnancy.
Posted by Mary Kirkland at 3:30 AM