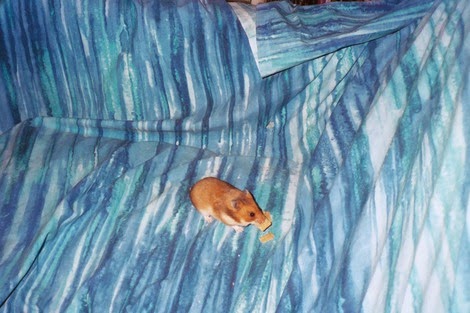 Hamsters make great pets for the right people. I don't think families with children under the age of 11 should let their children take responsibility for the little creatures though. They are small and fragile and will be easily hurt if a small toddler squeezes the hamster too tightly, so I would recommend not getting one until children are a little older and can play with their hamsters nicely.

Currently there are a lot of hamsters providing enjoyment and companionship for their owners. Their gentleness, ease of care, cuteness and amusing behavior make them very good pets. Hamsters like to cuddle, eat out of your hands, sit by you, and play. They like to play with whatever is within their reach, grasping with their little claws and hind feet as well. They will climb upside down, jump off the toys in their cages and climb all over you. The love to explore so if you sit on the couch and let them run around they will be quite happy to smell every inch of the couch and you as they explore their surroundings.

Watching hamsters as they eat can be quite amusing as well. Especially for the first time observer or small child seeing their hamster stuff mounds of food into their pouches and then hide it in their cages for later. It is wise not to disturb the hamsters food pile, it makes them feel comfortable and safe to have it.

But as easily as they might seem to like to come out, they do not like their cages messed with. Their food pile should be left alone until it's time to clean their cages. Which should be done weekly. It's better to train your hamster to walk out of their cage on their own then it is to reach inside their cage and take them out. I've found that your less likely to get bitten if you don't invade their space. Most hamsters won't bite you, but some will.

Hamsters are nocturnal animals, which means they do most of their sleeping during the day and most of their playing at night. If you provide your hamster with an exercise wheel and other toys they will be quite happy to be left alone at night when you are asleep. You can however play with your hamster during the day if you wake it gently and give it time to wake up. They will be more than happy to come out and play.

Hamsters unlike other animals never need a bath. They groom themselves all the time. Most of the time when they wake up and start their nights, you will find them inside their beds grooming themselves for a while before they are ready to come out and play. Most times my hamsters will groom themselves for an hour, come get something to eat, use their toilet corner and get some water from their water bottle.

Their are different types of hamsters, a few are the Teddy Bear hamster or Syrian, The Chinese Dwarf hamster, Roborovski hamster are just a few.

I've found that the Teddy Bear hamsters are the best for pets. But they need to be kept by themselves. The are solitary animals and will fight if you put two or more together. Hamsters do make great pets for people living in apartments and have minimal room for a bigger animal. They don't require a lot of space.
Posted by Mary Kirkland at 12:00 AM