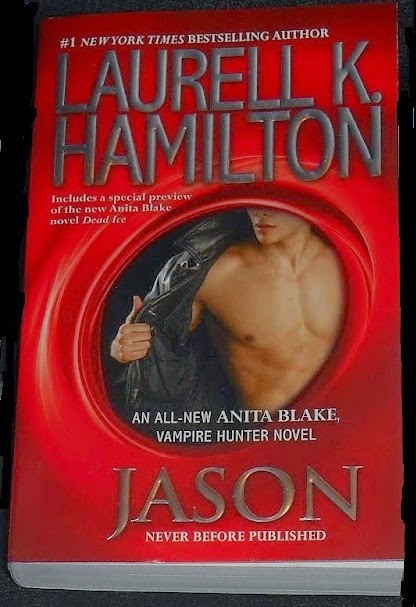 Blurb From The Back Of The Book...

"Enjoying pain with your pleasure is something you either get, or you don't. If you get it, then you don't really need it explained, because you know how good it feels, and if you don't get it then no amount of talking is going to convince you it makes sense."

But sometimes you have to explain the unexplainable, especially if the love of your life needs to understand, or she'll leave you. Jason Schuyler is one of Anita Blake's best friends and favorite werewolves, with benefits. J.J. is his lady love, an old flame from childhood who dances at one of the top ballet companies in New York. She's accomplished, beautiful, and she's crazy about him, too. Neither of them wants to be monogamous, so what could go wrong?

J.J. is enthusiastically bisexual, with an emphasis on the female side of things. She plans to keep sleeping with women, because Jason can't meet that need, just like she can't meet Jason's need for rough sex and bondage. J.J. doesn't understand why Jason isn't content to go elsewhere for a need she can’t fulfill, so Jason asks Anita to help him explain.

Anita is having her own relationship growing pains with her only female lover ever, Jade. Jason suggests that J.J. might be able to help Anita with her girl problem, while she helps him with his kinky explanations. With some encouragement from a few other lovers in Anita's life she reluctantly agrees, and J. J. makes plans to fly into town for an experience that none of them will ever forget.

It seems like I've been reading this series for many years, because I have and I still love it! If you haven't read the books in the series before this one you might be a little lost as to who is who and what's going on so I would highly recommend starting with the first book and going from there.

Jason has always been one of my favorite characters, he's sweet, naughty and just the right amount of fun. He loves to make funny remarks that don't always go over well because he says them at the wrong times but I think he does that to get a rise out of people.

In this book, Hamilton reminds us why we love this series and why we keep reading her books. This novella doesn't bring in all of the characters that most of the longer books in this series do because this novella focused on Anita, Jason, J.J, Jade and Nathaniel. So we get to focus on them with a little bit of the other characters in the background. Now if you're a fan of Richard's *I'm not* then this novella might get you riled up because there's a fair amount of Richard bashing but c'mon, he's totally earned it. I wanted to like Richard but I just don't and I think all the bashing that is done on him is totally deserved.

This novella is all about relationship building, a little look into the relationship between Anita and a couple her friends *with benefits*. There's a lot of sex in this book, so if that's something that bothers you this might not be the book for you to read but if you love the LKH books and have been reading this series then you already know that there's usually quite a bit of sex in them so if you're still reading them, you probably don't mind that.