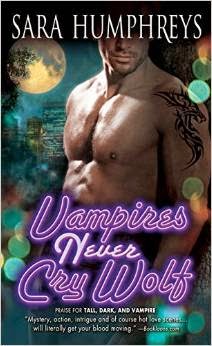 Vampires are nothing but trouble...
As far as beautiful vampire Sadie Pemberton is concerned, werewolves shouldn't be sticking their noses into New York's supernatural politics. They don't know jack about running a city-not even that hot-as-sin new vampire-werewolf liaison who's just arrived in town.

Werewolves are too sexy for their own good...
The last thing Killian Bane wanted was to end up in New York City playing nice with vampires. Unfortunately, he's on a mission, and when he encounters the sexiest, most stubborn female vamp he's ever met, he's going to have to turn on a little of that wolfish charm...and Sadie's going to learn a thing or two about what it means to have a wild side...

Sadie is a two hundred year old vampire and the new owner of the club called Coven. The only club in town where paranormal creatures as well as unsuspecting humans go to hang out.

Killian Bane is a werewolf but not just any werewolf he is a werewolf prince and he knows Maya's secret that she could turn a werewolf into a human. He's kept her secret because the other werewolves aren't hunting her down to kill her but when he comes to the bar where she works, she gets nervous and do does Sadie.

Killian would assume the throne on his 30th birthday as long as he had a mate and he had his eyes set on the sexy vampire who ran Club Coven, Sadie.

But of course just when things seem to be going in the right direction for a couple just getting to know each other, there's a big stumbling block that gets thrown in their way. This stumbling block just happens to be a she-wolf who has her eyes set on being Killian's mate and the next queen.

This story had some really funny moments in it but I think one of the funniest things I read was when Trixie said, "Holy crab cakes" when she was very surprised by something that had happened. That might just be my new favorite expression.

There are  a few twists and turns along this story and I really liked not knowing what might happen next. But when a werewolf and a vampire get together, you know there's going to be some fireworks.

This book will be released on March 3rd of 2015 but you can pre-order it now on Amazon.

I was given a free digital copy by the author in exchange for an honest review.