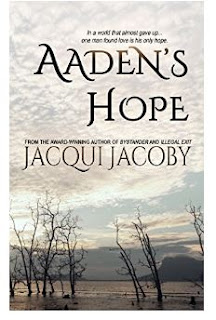 There is no cure,” Aaden said. “It’s over. Mankind took the hit.”

It took little time for the world to go from cell phones, credit cards and the Internet to barren continents and too few people to count. The very few who remained refused to roll over and die. Now, four years later in a small campground in Northern California, twenty people rely on each to make it day to day.

Before 'The Fall', Aaden Muñoz lived as a laid-back handyman with more music in his mind than crops. Now he serves as an unofficial leader, keeping wheels moving when chaos wants them to stop. Digger “No-Last-Name”, the newest recruit, is an efficient government operative carrying a secret grief no mother should ever have to bear.

The days of keeping the food growing and the supplies coming in are never-ending. Each survivor is responsible to the person next to them, helping them stay safe, healthy and happy. The camp is a place of unity, family and hope … until betrayal comes from nowhere with a knife to decide that maybe, none of them were meant to survive.

I love it when a book grabs me in the first few pages and I have to say that this one sure did. In the span of five minutes I was laughing at Aaden's carefree attitude about how he woke up in some woman's bed who he knows is just a fling. The next minute he's watching the news about some new outbreak that's killing people, but he gives it just a passing glance and doesn't really seem too concerned about it. That's when Aaden decides to go camping and things drastically change. People are dying, the first 2 that we read about damn near broke my heart and that was all in the first five minutes of reading this book. To say that I was hooked is an understatement.

Aaden stays at the place he set up camp and a couple of new people show up every once in a while. Within a couple of years, most people around the world are dead and the ones they come across end up coming back to the campsite with them. They venture out to get supplies every few months and aren't all that worried since they think there really aren't many people left alive in the world. Things heat up when they come across a man and woman and all hell breaks loose after that. The female who calls herself Digger, comes back to camp with them and she has a whole van full of supplies that they bring back with her. You'd think that would make everyone happy but for some reason a few of the other 19 people at the camp aren't so happy. Crazy things start to occur and there's a murderer among them.

This is a story of what happens after a virus wipes out most of the world's population and a small group of survivors try to make their way towards some sort of future. It's also a story of how just one nutball can ruin a good thing when people are fighting for their lives and their future.

I received this book free in exchange for an honest review.
Posted by Mary Kirkland at 12:00 AM