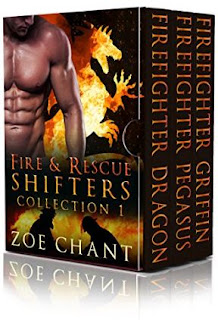 Three unique shifter heroes who will set your heart aflame!
Whether it's a rogue dragon or just a scared little lion cub shifter stuck up a tree, the firefighters of Alpha Team can handle any emergency. But there's one inferno even these powerful shifters can't fight... the fiery passion sparked by their true mates!

FIREFIGHTER DRAGON - Welsh dragon shifter Dai rescues a curvy archaeologist with a priceless find and a ruthless enemy who’ll do anything to get his claws on it. Can Dai protect his mate, and convince her the only treasure he wants is her heart?

FIREFIGHTER PEGASUS - No one know that Pegasus shifter Chase’s ready grin and reckless ways hide a broken heart. But now fate has handed him a second chance to win back his one true mate...

FIREFIGHTER GRIFFIN - Torn between two inner animals, retired firefighter Griff has only months to live. But his true mate and her young son need a man who can protect them forever...

I'm going to do a mini review for each of the books that I read in this collection.

Virginia had been looking for proof that she'd found Brithelm's burial place when someone found her in a place she wasn't supposed to be. After running away, a huge dragon appeared in front of her and she ran. Virginia had inadvertently stolen something from a dragon's hoard and he wanted it back. Dai and his team save her from a fire but Dai realizes that Virginia is his mate. Dai has a face to face with the angry dragon who wants his coin back and assures Dai that he will be coming for his stolen property so Dai tells her that he is there to protect her from the dragon. The story was a fun one and ends with Dai and the other dragon facing off to see who will win.

Connie was always finding her father making another gambling bet that he couldn't cover. She was always looking for him in the seediest of bars and making sure he got home before he got himself in over his head. When her dad gets caught cheating, she starts a fire in order for them to get away. When Chase and his team get there to put out the fire and he finds Connie in the fire and pulls her out. He can hardly believe he's found her again because they had a falling out years ago even though he knew she was his mate. He's hoping to explain what happened all those years ago and have her forgive him and have a second chance with her. Connie's father had gambled her plane in a bet and the thugs broke his arms so he couldn't fly the plane in a race so Chase decides to fly in his place and win so she doesn't lose her plane. Things don't go as planned, a surprise enemy surfaces to put them in danger and Connie finally finds out the truth. This was such a good story.

This was my favorite story in this collection. Griff  has two animals inside him, a lion and an eagle but he's never been able to shift because neither animal will give up control and they fight all the time. Because he can't shift, he's dying and only has a couple of months to live. He's a dispatcher for the fire department and when one of the other dispatchers gets a call about a little boy turning into a lion and getting stuck up a tree, he knows he has to go check it out. He helps the cub down from the tree and finds out the boys mother is his mate. Hayley hasn't seen her son's father since before he was born. The guy just took off and wanted nothing to do with their son. But she sends him an email about him shifting into a lion cub which causes all sorts of problems because now that his son has shown that he inherited his shifter gene, he wants custody of him. The boys biological father turns out to be a complete jerk and Griff turns out to be exactly what she needs in her life. I felt bad for Griff with all her had to endure because his inner animals fought for supremacy and stopped him from being able to shift the way he should have been able to. But this story has a great ending and now I am looking forward to reading the rest of the books in this series.