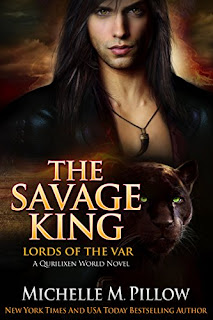 Cat-shifting King Kirill knows he must do his royal duty by his people. When his father unexpectedly dies, it’s his destiny to take the throne and all of the responsibility that entails. What he hadn’t prepared for is the troublesome prisoner that’s now his to deal with.

Undercover Agent Ulyssa is no man’s captive. Trapped in a primitive alien forest awaiting pickup, she’s going to make the best out of a bad situation… which doesn’t include falling for the seductions of an alpha male king.

About Lords of the Var Series
The cat-shifter princes were raised to not believe in love, especially love for one woman, and they will do everything in their power to live up to their father’s expectations. Oh, how the mighty will fall.

Ulyssa is undercover on an alien planet and waiting for her people to come with a ship and pick her up. She thinks that she's gathered her intelligence and can now just wait for pick up. That is until the new King's brother finds her and brings her back to the palace thinking she's to be a part of a harem for the king.

King Kirill is appointed king right after his father unexpectedly dies. He finds Ulyssa and thinks she must have been one of his father's harem girls but he finds out she never was and he finds her interesting. So he makes her a deal, she can stay with him until she is picked up or she can live the next three months in less than desirable conditions. Of course she takes him up on his offer but it's not easy because she's not used to being under a male's orders even though she likes Kirill.

This was my first book from this author but this read like a standalone even though I found out later that it's part of a bigger story. I liked Kirill, his people and his brothers. He doesn't want war with the other half of the planet but there are others that don't readily feel the same way. The Var and the Draig are the two species on this planet and they could easily go to war so it's up to Kirill and others to make sure that doesn't happen.

The ending of this book had a good twist and ended really well. I was wondering how that storyline was going to play out and was worried for a while because of all the changes that were happening but the ending was spot on. I really enjoyed this book and that cover is so awesome.