Review: A Way With Words by Kitt Crescendo 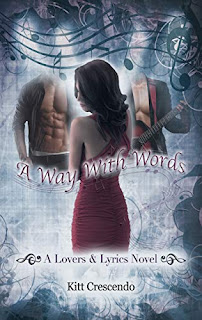 Kalina Santos went to Nashville to lick her wounds and regroup. A random encounter with a stranger leads her to adventure and a new career opportunity.

Country star, Drew Kendall, was jaded and worried about losing his band. The last thing he expected was to be intrigued by a brown-eyed beauty with no idea who he was.

Drew never intended to hurt his bandmate, Ty. But carelessness has consequences and some things can’t be undone.

One woman. Two bandmates. Will Kalina come between them, or is between them where she’s meant to be? If love is a song, what happens when the tune of your heart sounds more like a trio? Will outside forces generate discord and sharp notes, or can three unique souls blend to create the perfect harmony? You won’t want to miss a beat of this love ballad.

Kalina picked up her life after her fiance cheated on her. She makes a complete break, moves away and goes to stay with her friend, Jude. Once on the plane Kalina makes friends with a sexy cowboy named Drew. The flirtatious banter between them was so much fun. One thing leads to another and I'll never know how they didn't get caught! They never even exchanged names by the time they got off the plane when it landed.

So when Kalina gets a job as a song writer where Jude works and Drew spots her, he's more than a little surprised. Their second meeting doesn't go as well as the first one but things quickly get better once they start talking. Drew is a country singer and Ty is the drummer for the band.

Ty and Drew have been best friends for a long time but now they have more intense feelings for each other as well for Kalina. It was fun watching them learn to have a relationship between the three of them and watch the guys figure out what they're new relationship was. They were stronger together so when a problem appears for them and it involves all of them, they lean on each other to get through it.