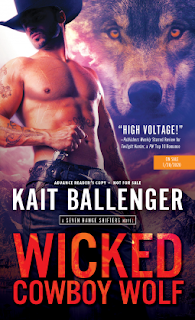 Third in the dark and dangerous Seven Range Shifters series where the sexy cowboys are ranchers by day and wolf shifters by night.

***
To his enemies, he's known as the Rogue. To her, he's her only chance at survival…
Years ago, Grey Wolf Jared Black was cast from the pack for a crime he didn't commit. Now, he's the mysterious criminal wolf known only as the Rogue, a name his former packmates won't soon forget. But when a vampire threat endangers the lives of their entire species, Jared must confront his former packmates again, even if that means betraying the only woman he's ever loved…

Ever since Maeve Gray escaped the pack's bloodsucking enemies, she's been determined to save her species—and fast. Each passing day risks the lives of her friends and family. But when a wicked cowboy wolf shows up on the Grey Wolf ranch, offering everything Maeve's heart desires, her eyes are opened to a whole new world beyond the packlands. For this cowgirl, sleeping with the enemy could prove as desirable as it is deadly…

Maeve (mae) lost her best friend when she was a teenager and she's never really gotten over what happened. Her uncle was a scumbag and her father was a jerk and now her brother is the packmaster or alpha in charge. He loves her but she knows she'll have to marry an alpha she doesn't love for the good of her pack.

Rogue is a rogue wolf that takes in other rogue wolves who have no where else to go. He's essentially the leader of the rogue wolves. He has had a rough life because of a choice he made when he was just a kid.

Rogue saved Mae from the vampires when they kidnapped her to steal her blood to experiment on for nefarious purposes. But he had plans to use Mae to get back what is rightfully his. He doesn't want to hurt her but he doesn't see any way around it. He made a deal with her when he saved her and now he's come to bring her back to his ranch where she'll be safe from the vampires who are looking to kill her.

Mae doesn't want to do what is expected of her anymore so when Rogue comes and tells her that she can be free and safe from the vampires, she willingly goes with him. But the vampires keep coming after her so they have to track down a scientist who can help then get the serum they need in order to keep her safe. Once they get that the vampires should stop coming after her. But while she's with Rogue, the attraction they feel for each other explodes. Rogue is hurt because she doesn't recognize who he really is and she gets hurt later on when she realizes that he and her brother lied to her.

This was such a good book. Not only does this book have vampires and wolf shifters but it also has a great romance. My heart broke for Rogue so many times because of what he's gone through. Mae's uncle and father were awful people and even though her brother is not like them he lied to her which hurt her.

The secondary characters were great, I especially like the kids and Tucker the pig. Imagine a wolf shifter having a piglet as a pet, it was hilarious. This book made me laugh, cry and get mad so many different times.