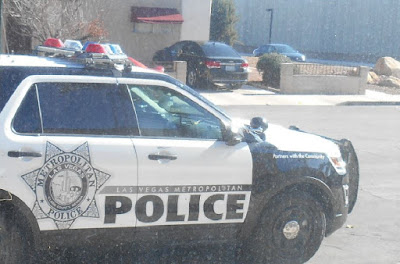 Ken called me in from the bedroom when he heard shouting outside and I got there in time to get a picture of the police car parked in front of our bedroom window. He said two police officers had got out and ran towards the office courtyard so I took Falcor for a walk and heard a lot of shouting coming from an apartment in that courtyard but when the police came out they were alone and didn't arrest anyone. So I don't know what went on or why the police were called. But they did show up for something. Hey, at least it wasn't my courtyard this time it was one courtyard over but still in my apartment complex. 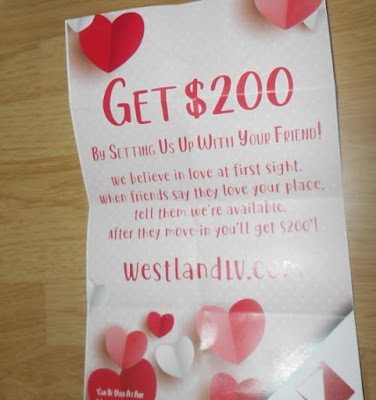 Now for something truly funny. I found yet another notice on my door this week but this time our apartment management company is offering people who live here a $200 incentive to get their friends and family to move here. I think it's hilarious that they think anyone who lives here would suggest a place that has the cops here several times a week, drug dealers, homeless and drug addicts walking around causing drama and fights with other residents. If anything, I would tell my friends and family not to move here. lol I just can't make this stuff up. Good grief.