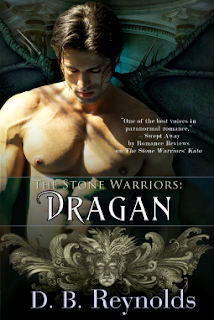 It was a time when gods walked the earth, when armies fought not for bits of land, but for the very existence of humanity. On such a battlefield, five formidable warriors stood against an evil greater than any the earth had ever seen. But evil is not an honorable foe. Betrayed by someone they trusted, the warriors were cursed, one by one, tossed into the maelstrom of time, imprisoned in stone, their freedom resting on nearly impossible conditions. Until… Dragan Fiachna, heir to the curse of royal blood, a horror hiding behind a beautiful face… you shall remain locked in stone until a maiden, untested and pure, shall find grace in your beast and safety in your nightmare.

Dragan Fiachna, born to a life of loneliness, cast into stone by a sorcerer’s curse and imprisoned forever in darkness. He is freed at last, only to discover his enemy still lives and is plotting the death of millions in his quest to rule this new world.

Maeve Collins, brilliant, courageous, and compassionate enough to believe a stone statue can have a soul. Shocked when her beautiful winged man breaks free, horrified at the torment he’s endured, she dedicates herself to reuniting him with the warriors he calls family.

But she never planned on falling in love.

Racing across half the country in search of the only man who can stop their foe from fulfilling his merciless scheme, Dragan and Maeve discover they’ve unwittingly stolen the one artifact that can defeat their enemy. And he wants it back. Pursued by assassins, they fight their way to Dragan’s brothers, only to discover the war for this world has already begun. . .

Maeve had taken a job cataloging artifacts and treasures for a very unpleasant man, Mr. Sotiris. But she loved her job and there was a beautiful statue that she talked to all the time, the statue that Dragan had been cursed to live inside for all of eternity until someone could break the curse and release him. Mr. Sotiris was more than he seemed to be and very dangerous but she just thought he was strange for raging at the statue all the time.

Maeve would sit and talk to the statue of Dragon all the time and Dragon loved the company even though she had no idea he was actually there. When the stone statue cracked and broke and Maeve broke the curse, Dragon was set free. At first Maeve didn't believe he was actually inside the statue but she came to quickly believe Dragan was telling the truth. Knowing the Mr. Sotiris would probably know somehow that the statue had broken, Maeve and Dragon took a few artifacts and left before he could come home. She was really good with computers and had excellent ways to block anyone from tracking her phone or laptop so they were safe on the road for a while.

The first thing Dragan wanted to do was find Nicodemus or see if he was still alive. Maeve found him online and they set out to go to where he lived, which would take a couple of days by car. On their way to meet up with his old sorcerer friend they find themselves in danger from vampires but Dragan is more than enough of a warrior to take them on and defeat them. But it's obvious that if her old boss finds out where they are, they'll be in real hot water. The danger is real and one mess up will have that danger at their door.

Maeve and Dragan get a lot closer and their romance was nice, but it didn't move me. I wanted sparks, fireworks or just something more but I just didn't feel it with them. Dragan is a nice guy and Maeve is a smart, nice woman but they didn't seem like they fit together to me.

This is the 4th books in this series but it's the first book that I've read. I didn't feel lost or feel like I was missing anything and I read this just fine but I might go back and read the other books just to catch up. Dragon's friends are awesome, I really liked them and their mates. The secondary characters are great so I'm looking forward to getting to know them a little better. Sotiris is an evil man hell bent on causing them to suffer but I have a feeling that he's not gonna get his wish as the series goes on.

I liked this book but didn't love it, but I think I will read the other books in this series.

Disclosure: I was given an ARC or this book via NetGalley but all opinions and thoughts are my own.
Posted by Mary Kirkland at 12:00 AM