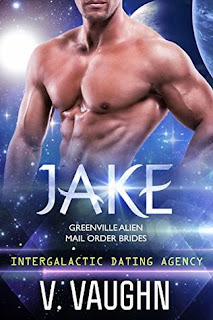 Hannah Sullivan takes the life of a flaky artist to an extreme, so it’s no surprise to her friends when she decides to pick her alien life-partner at random. When Jake28 arrives and she discovers he really can cook, Hannah’s personal life seems perfect. But professionally, she’s still paralyzed by her own self-doubt.

Jake is thrilled to finally come to earth and meet his nearly-perfect match. Especially when he discovers the chemistry between them is beyond what he imagined. As Jake settles into his new life with Hannah, he discovers that more than just her kitchen is in disarray. While he can see Hannah’s true talent below her messy exterior, she can’t. When she pushes him away, he must figure out how to free her muse and claim her heart.

When a plague wipes out most of the male population on Earth, aliens from a planet called Erosicia agree to have males from their planet come to Earth and marry the woman who chooses them from the dating agency website.

When Hannah picks Jake from the list of matches, she didn't think that his profile was really the truth but when he said he likes to cook, he wasn't lying. Hannah doesn't cook, she would much rather order take out or eat snacks so when Jake shows her that he really can cook and it's good, she's impressed.

They are attracted to each other which is good but they're very much opposites. So each of them are going to have to compromise a bit if this match is going to work.

I really thought that this was a sweet, short read that didn't take me much time to read. I was in the mood for a quick read and this was exactly what I wanted. The aliens seem very human-like so there weren't a lot of alien type things culturally to get used to which was good. I had a good time with this book.