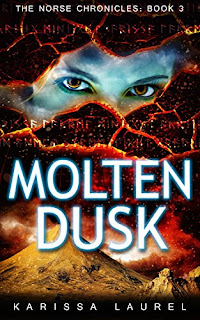 While recovering from a devastating betrayal, Solina becomes increasingly drawn to Thorin as he helps her hunt down Skoll, the mythical wolf who vowed to kill her. If she can find and destroy the beast, she’ll bring a swift and brutal end to her enemies’ schemes. But nothing ever goes as planned in Solina’s strange new world.

During her search for Skoll, Solina uncovers a plot to unleash a battalion of legendary soldiers and launch an apocalyptic war. Before she and her allies can locate the fabled army, several ghosts from her past return to haunt her. Solina must fight for life and the fate of the world, or her hopes for love and a peaceful future will go up in flames.

Solina is still getting over the huge betrayal she was faced with in the last book and everyone seems to be giving her the space she needs, at least for a while. On more than one occasion she and Thorin find themselves in danger and even though Thorin wants her to stay safe, she puts her life on the line for him more than once. Solina is definitely more kick-ass than I gave her credit for in the first book. She's grown a lot and can handle her powers a little better now.

While she and Thorin are spending more time together, Baldur is trying to spend time with Nina ever since he found her. Nina isn't what I expected her to be at all and I thought she would betray them the first chance she got. I didn't like or trust her. But it must be really weird to have some stranger come and tell you that you're the reincarnation of his dead wife and he's a norse god.

Throughout this trilogy I've been rooting for Thorin and Solina to finally get together. While reading this third and final book in the series, I found myself thinking about that song, "Kiss The Girl" from The Little Mermaid because Solina and Thorin fought their attraction for each other throughout this series and I just wanted to see them together already. Good grief man, make a move already! lol But it was obvious that both of them had strong feelings for the other since they kept saving each others life over and over again. So it was awesome when they finally let their feelings be known. They do make a great couple though so I was happy they finally let their guards down enough to get to this spot.

Solina, Thorin and Baldur have to find the bad guys and there never seems to be an end to the people that want them dead. Skyla finally finds out all the secrets surrounding her life and who she is which was truly mind boggling. There were so many secrets floating around in this book, so many twists and turns but that just made this more interesting.

I almost felt bad for Val, the reason he was so upset because of what had been done to him was truly awful. What he did to get revenge was bad too though so I was conflicted about how I felt about him and what he made Solina do. It was just sad really.

While I usually read a romance centered book, this one had enough action, twists and exciting storyline that it kept me engaged. If you enjoy norse mythology, you might like this one.